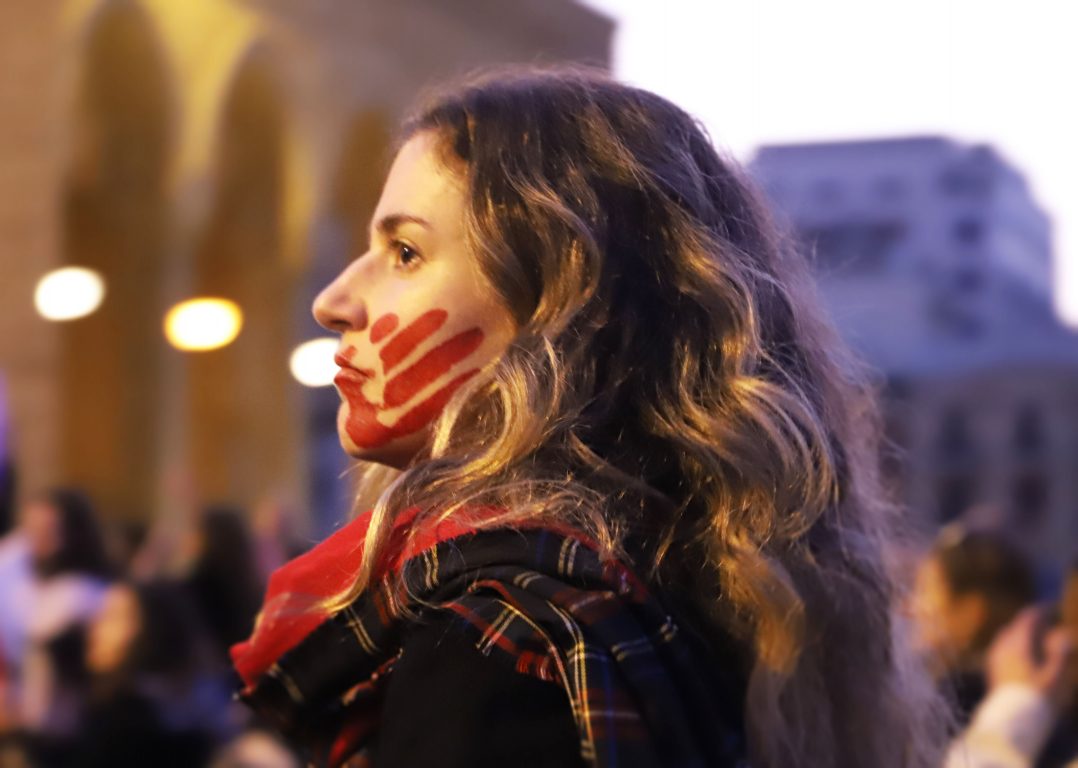 On the 7th of December 2019, people marched from Bliss street- Hamra to Riyad al Solh in solidarity with survivors of sexual harassment and assault. The march was inspired and came in response to an online movement calling out on Marwan Habib, a sexual predator in Lebanon, and denouncing his presence in the Civil Parade on independence day. Huge number of women exposed his picture and circulated it on their social media platforms sharing their accounts of Habib harassing them, or someone dear. Marya Latif, an 18-year-old woman, was the first to come forward telling her story on twitter of how Habib, uninvited, aggressively and persistently asked her to sleep with him after their first encounter in Zaatar w Zeit Hamra branch. As a result, Marya was sued by Habib on account of cyber bullying/defamation pressuring her to share an apologetic tweet of her earlier post, and stating that it was a misunderstanding.

To encourage survivors of sexual harassment to speak up and stop predators from taking advantage of the dominant patriarchal system in Lebanon, and in support of Marya, Beirut by Dyke – an Instagram page that shares comics about being Queer in Beirut – took the initiative to share dozens of reports of women harassed by Marwan Habib. Following the Page’s footsteps many other influencing pages did the same such as Polleksandra. The messages varied between those who warned girls from Habib, and those who spoke up on their personal experiences with him. “This guy has sexually harassed every girl I know who has walked into Urbanista Bliss” one of the girls tweeted while another one asked, “Guys who is this guy in the revolution that was supporting the athletes something? He’s harassing women and touching them, please be careful and don’t come near him. He touched my best friend and she was scared of him”. 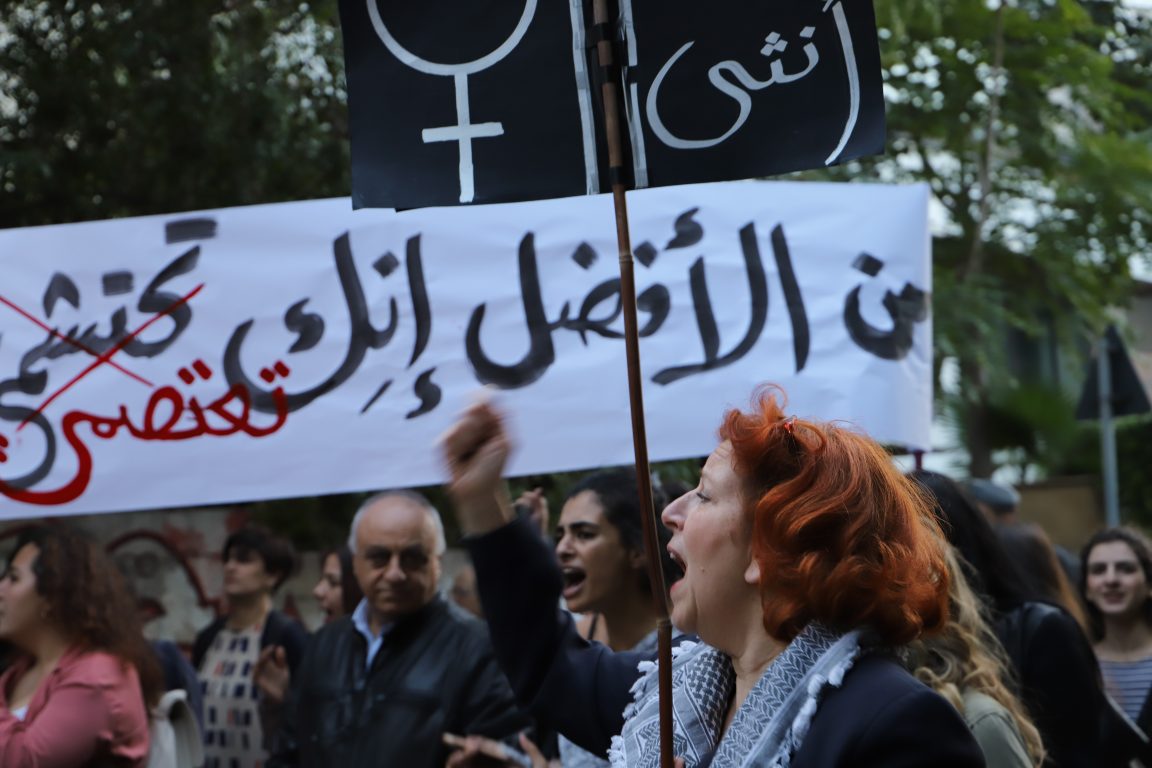 The march in solidarity with survivors of sexual harassment came in context of the Lebanese revolution which did not exclude women’s rights from its causes. Similar to other Arab upheavals, the Lebanese revolution commanded the fall of the regime and was dominated by the chant “Al-Sha’b yurid isqaut al-nizam!”. In Arabic nizam does not only designate the regime but also indicate “order” and “system”; “thus resonating collective demands which can’t be interpreted simply as a call to overthrow a government or for the rearrangement of ruling seats but as a space to include the concerns of those marginalized”. To that, gendered slogans and women’s right calls came to the fore of Arab upheavals and Lebanon’s revolution was one of them. As protesters wait for more comprehensive strategies concerning broader structural reforms, they didn’t fail to recognize specific and disproportionate injustices against particular groups in the country. Women are one of the most marginalized and discriminated entities in Lebanese society and their discrimination is embedded in the country’s laws, economic practices, and social and political norms. The uprising provided agency for women to speak up and created an adequate environment for the down fall of the system not only its governmental body but, the whole socio-political structure it represents such as the patriarchal system. In this way, the Lebanese revolution brought women’s demands to the table as they realized that all the citizens, with all their diverse demands, are struggling because of the same failing system that they must end.

From the start, women have been an integral part of Lebanon’s revolution. On October 17th, thousands of Lebanese people took the streets condemning and calling for the downfall of the sectarian, power-sharing corrupt system that has failed people over and over again with poor governance and corruption. It all started on the first very day of the anti-government protests when one of the Ministers Akram Chehayeb’s body guard shot in the air in attempt to disperse a group of protestors in Beirut. A few moments after, a footage of a woman kicking the body guard circulated social media platforms and became symbol of defiance. The video went viral and shortly Lebanese females became the icons of the revolution. Ever since, women have played a leading role in the revolution and the slogan “the Revolution is female” dominated the nation’s anti-government movement.

As clashes and tension between the protestors and government’s armed forces started to take place, many images circulated of women and young females using their bodies to form a barrier between the two. Women were on the frontlines protecting their fellow protestors and trying to avoid violence in the protests. The women’s actions stripped the dominant prejudices against women’s bodies that are often associated with sexual desire, reproduction, and intimacy and reshaped them to become symbols of resistance and strength. They forced a re-imagination of the female body separate to the “normative” meanings and values attached to cultural and social patriarchal constructions. 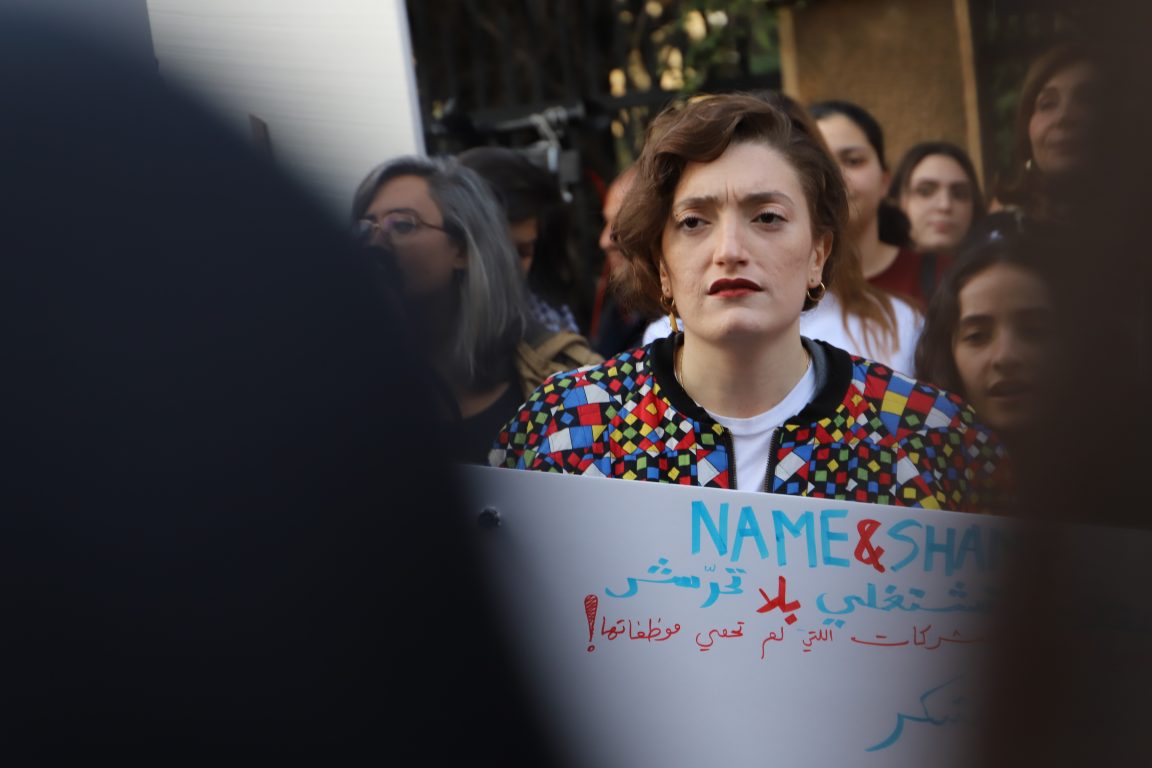 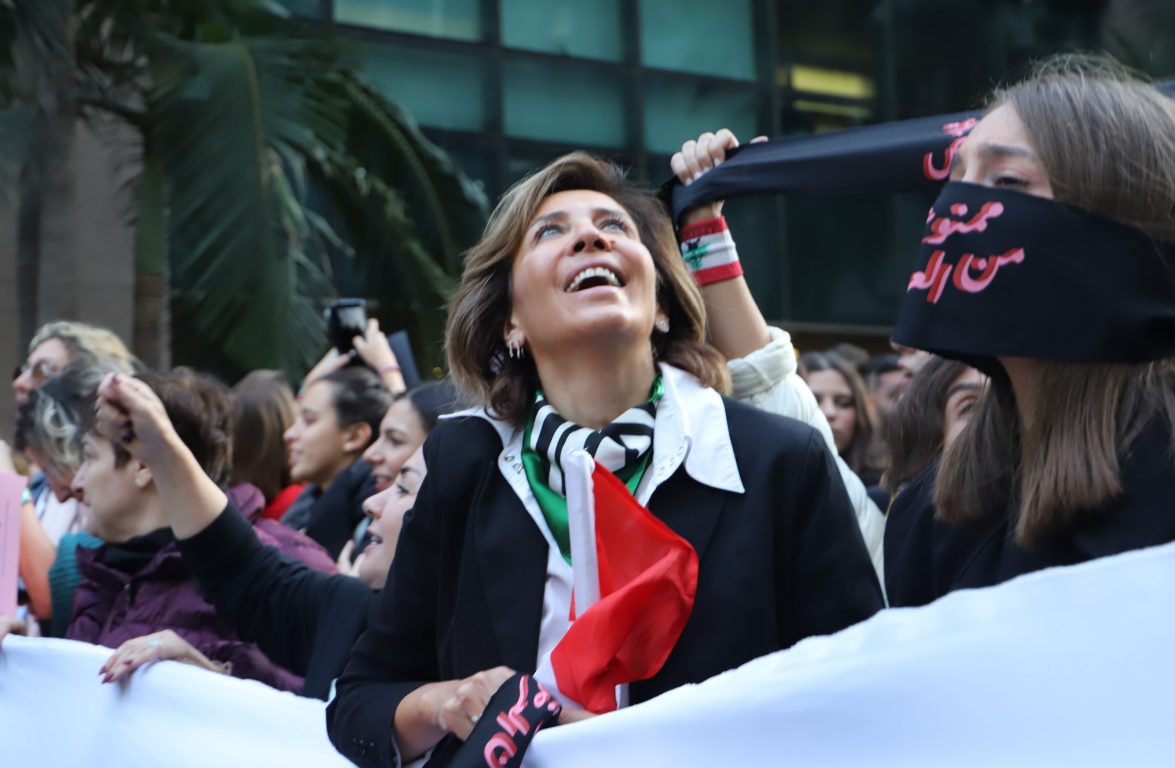 This online movement campaign, where women used their personal social media spaces to express their voices has forced local satellites and public communities to respond to their demands and acknowledge their presence in politics and society. The fact that women and young females resorted to online platforms to share their stories speaks a lot about women’s worries when it comes to testifying about sexual harassment, abuse, or rape. In a poll made by Beirut by Dyke asking their audience to share their concerns about stating sexual harassment experiences, most of the answers showed that women were mainly worried about being discredited, blamed, judged, or stigmatized by society. Many of Lebanese females are afraid to come out and speak of their experiences as people question their honesty and survivors are often blamed. Some of the females asked “What if no one believes me?” and another said, “I will be asked questions such as what were you doing with him in the first place, and what was your reaction?”. A lot of comments and opinions came in regard of Marwan Habib’s case itself illustrating the frustration of sexual harassment survivors face in Lebanon. There were people who either sympathized with Marwan Habib for being “mentally ill” or “traumatized”, or invalidated the survivors for not having evidence against him or by stating that they are jealous of a “handsome man”, or even questioned the reason of why survivors didn’t come forward when the incident first happened. The discredit females face when they speak up about their experiences is one of the reasons why survivors of sexual harassment remain silent as they feel powerless and unheard in society.

Being discredited is not the only issue for survivors to come forward, many expressed the concern of safety. Survivors often hide their experiences with assault or rape because they’re afraid of their families and their environment’s reaction to it. Rape culture in Lebanon exists, as “honor” is still associated with females’ bodies and survivors are often believed to bring “shame” or “dishonor” upon the family, or has violated the values of a certain community. Knowing about their claims many women can face abuse, violence, and sometimes death. The march didn’t fail to point that struggle out as one of the angry shouts was “Damn you Honor!” condemning by it the link of their bodies to the “honor” of male member of their families.

The legal status on sexual harassment also does not encourage females to come forward and testify. Article 507 of the Penal code states that “anyone who treats another with violence and threat, or perform an act of public indecency is sentenced to hard labor for a period no less than four years” yet, many females do not file law accusations against their harasser. This is because providing evidence to the incidence is a must to proceed with the legal complaint, and evidence is often not found because definition of harassment can vary and is not something tangible unless there is a witness. But, this is rare because if there was a witness rarely does harassment occur. Therefore, in general, many harassment complaints are not submitted due to the difficulty of providing proof, and due to the patriarchal mentality embedded in the judicial systems and mechanisms involved that often do not take the complaints seriously.

The Lebanese society in all its structures and systems discourage survivors of sexual assault to come forward and speak up on their experiences pushing them to search for an alternative space to express themselves. In this manner, digital technology and social media created an opportunity for women to have a voice that they might not otherwise have in their daily life. It’s easier for them to overcome society’s realms specially that they can use platforms that no one from their “real” life can be involved. Social media was a chance for them to talk without being judged, scared, or even identified, and created an escape from the consequences they might have faced in real life if they came out. Social media offered a source of support and reflected a virtual safe community which they couldn’t find in their actual societies and homes. To them online space, was their home, a place where they want to reside, and a place where they want to be. A place, where their lives are owned by themselves and constructed by them and no one else.

Lebanese women sought social media to talk about their intimate experiences, and speak up on sexual harassments they have faced. It was an opportunity for them to escape their society’s judgements and avoid involving their close circles on the issue. Marya Latif, the young girl who first took the initiative and spoke up on Marwan Habib, tweeted that the main reason behind her apologetic tweet was not a result of her fear from the defamation case filed against her itself, but from her fear of her parents finding out about it. Social media created for Lebanese women a “safer” and more comfortable supporting community to share their intimacy and privacy than their actual society. Marya, and the other girls who shared stories received hundreds of supporting and encouraging comments a reality which wouldn’t have happened outside that world.

In this sense, the socio-political transformation in Lebanon is not taking place in the absence of women’s contribution and participation. Their demands have become integral to the nations collective demands as a whole. Through their utilization of digital technology Lebanese women are using their private spaces to reposition themselves as active entities in politics and society. The virtual have provided for them a space for a discourse that wouldn’t have went through in traditional ways and forced the mainstream waves to follow their lead. 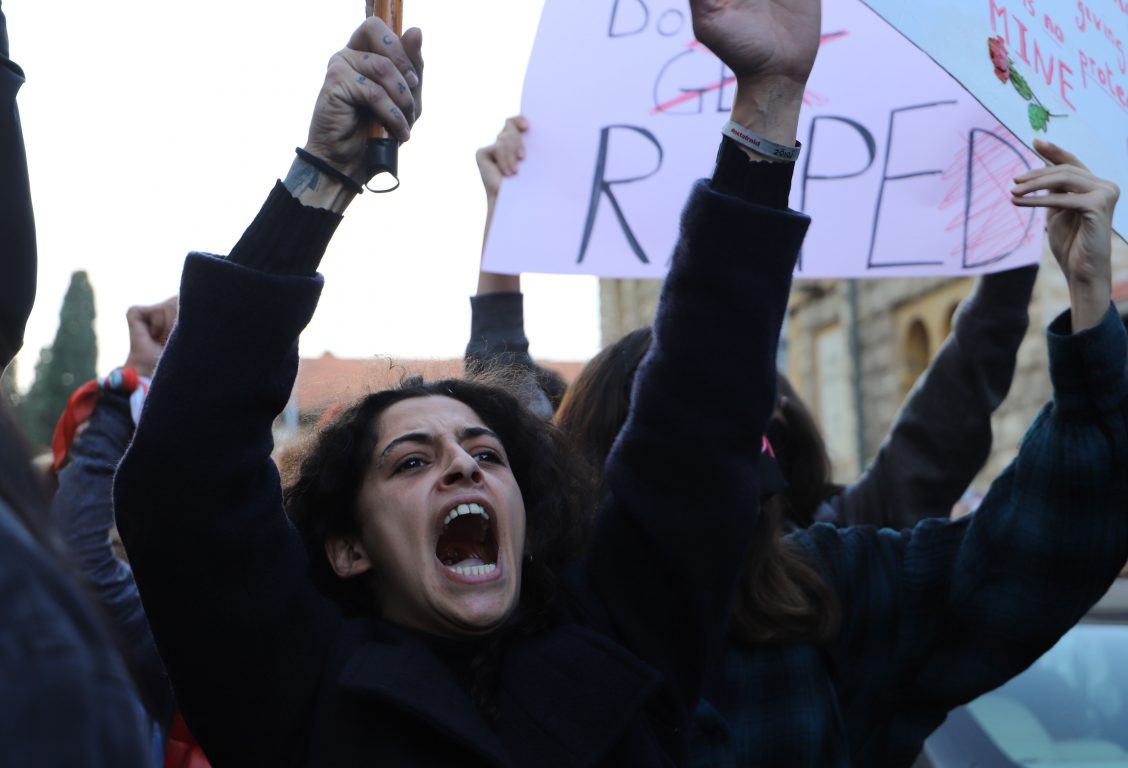 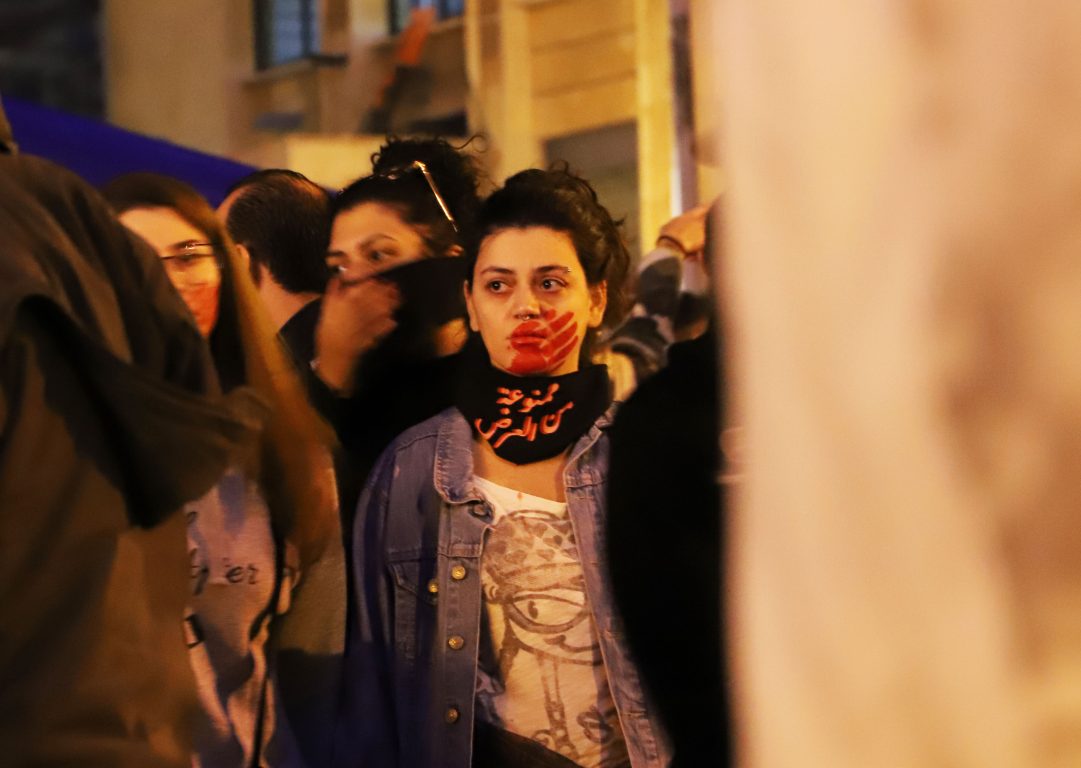 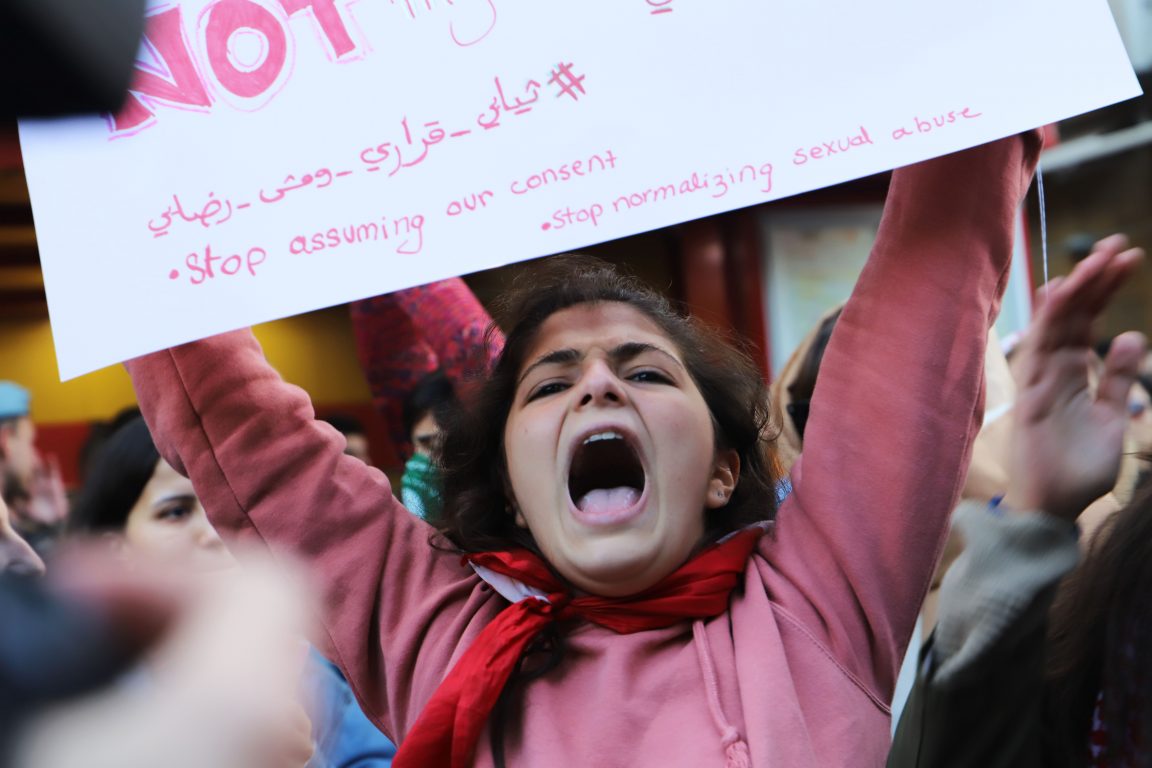 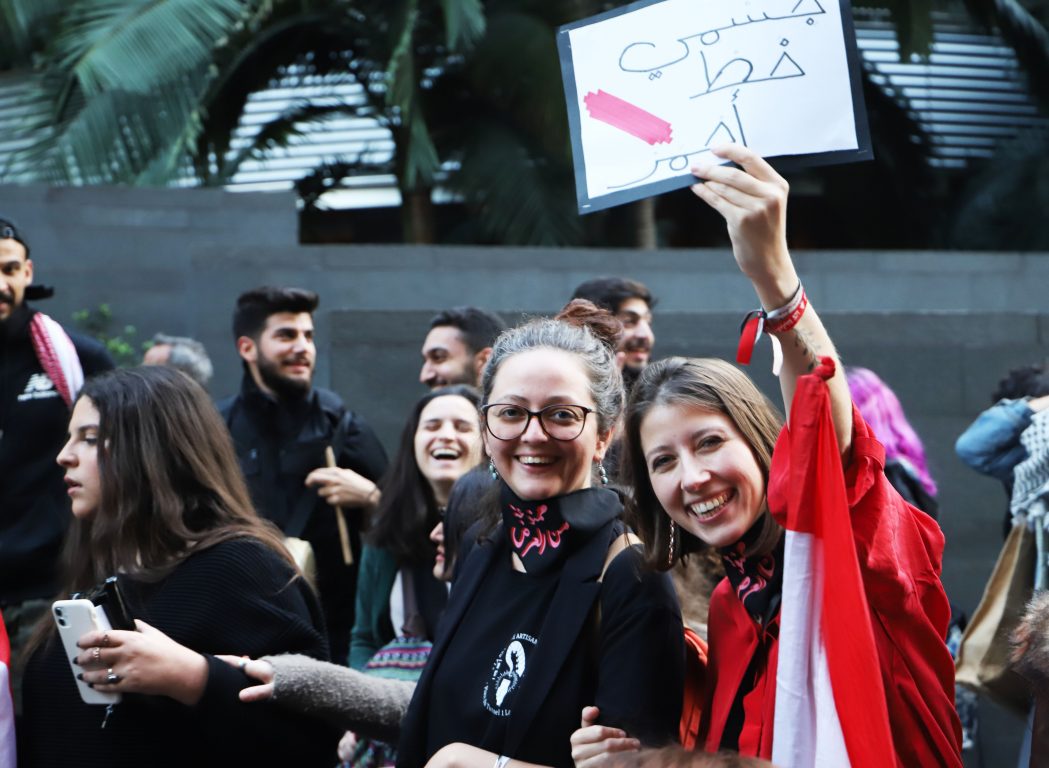