The following is taken from Newsroom Team members Sara Obaid and Samaya Jaber’s coverage, initially provided for Smex’s site, found here and reproduced with kind permission from Smex. Thanks to Karim Traboulsi for translation from Arabic.

Women’s innumerable contributions to society have long been sidelined. In a move to document and make these achievements accessible to all, SMEX partnered with the Knowledge Workshop, Radical, and independent feminists to host an editathon, a collective editing workshop of Wikipedia. The event provided a safe space for women to create new pages in Arabic, expand and enrich existing pages, and translate pages into Arabic.

The workshop, titled “Women Edit Wikipedia: Training and Editathon,” was held in “Masaha: A Space for Digital Freedoms and Open Culture” at SMEX’s office in Badaro on Saturday, November 4, 2017. It was the first women-only event of its kind to be held in Lebanon independently of Wikipedia. 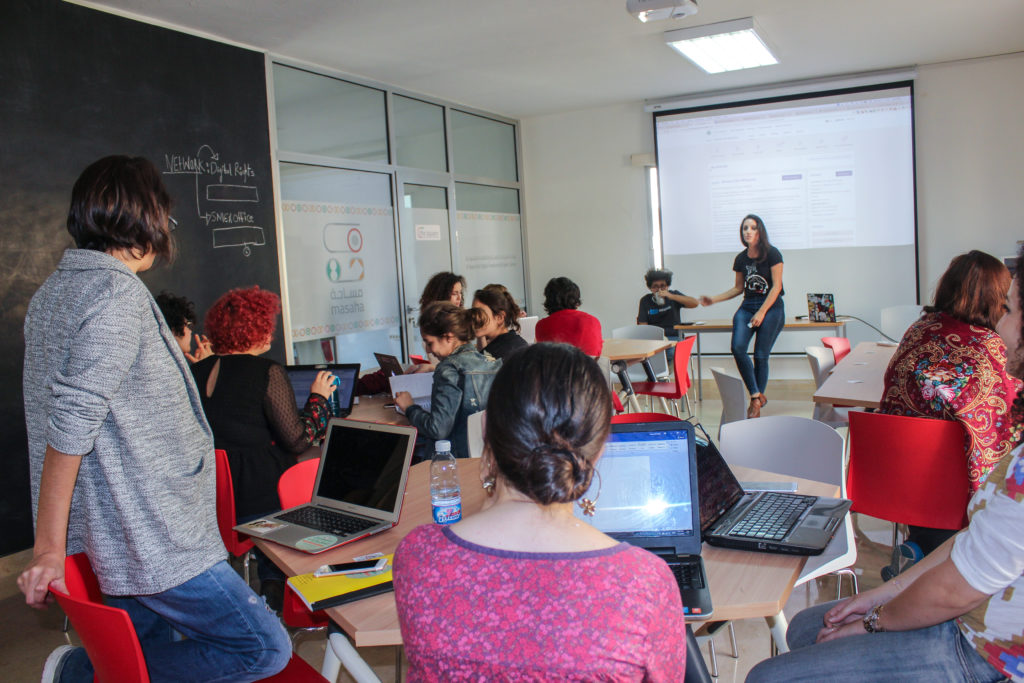 The event had two focuses: a technical approach to integrate women into the technological world and a content-oriented approach to enhance their ability to use Wikipedia to preserve women’s legacies and record their achievements for present and future generations.

Above all, the primary motivation behind the editathon was the unequal representation of knowledge produced by women. In the English version of Wikipedia, women account for only 17 percent of all available biographies and  account for only 13 percent of Wikipedia editors. In the Arabic version of Wikipedia, which has significantly less content than the English version relative to the size of the Arabic-speaking population, women are even less present. Even when they are represented on Wikipedia, women’s biographies are defined by their relationships to their spouses or other male family members, as opposed to their own contributions, according to Lara Bitar, SMEX’s editorial director.

Following Bitar’s opening remarks about the workshop’s goals, Emna Mizouni, a Wikimedia Tunisia activist and co-organizer of the first WikiArabia Conference in 2015, explained the work of the Wikimedia movement. Mizouni discussed the huge gap in the number of men and women in the movement, urging women to engage more in these initiatives, given the importance of safeguarding women’s achievements and knowledge for future generations.

Activist Nadine Moawad then explained the five pillars of Wikipedia: Wikipedia is an encyclopedia, Wikipedia is written from a neutral point of view, Wikipedia is free content, Wikipedia editors should treat each other with respect and civility, and Wikipedia has no firm rules. For her part, Deema Keadbey, co-founder of the Knowledge Workshop, overviewed the types of preferred sources, how to find and use them in the written texts, and the types of sources that can be cited. Writing in Wikipedia, despite its ease, requires a lot of precision in finding information and exploring sources that are credible and objective, explained Keadbey.

At the training session focusing on the creation of new pages, the names of several prominent Arab women who are not on Wikipedia were proposed. The figures included the former president of the Lebanese Women Democratic Gathering, the late activist Haddad Shakhtoura, journalist Nazih Sa’id, the late politician Zulfa Shamoun, researcher Azza Baydoun, and others. Participants in the session then, using their newly created accounts on Wikipedia, researched information on the women they selected.

This experience generated positive feedback from participants who quickly learned how to write articles on Wikipedia and had the opportunity to learn about women who share their interest in feminism and women’s issues. Together, they hope to be able to counteract the male-dominated content on Wikipedia. During the event, 14 new pages were created, including pages for Jean Said Makdisi, and the Gathering of Lebanese Woman Researchers, and the translation of the biography of Kimberlé Williams Crenshaw, American civil rights advocate and leading scholar in critical race theory. By the end of the event, 20 new editors were trained to edit properly Wikipedia pages and 3,700 words were added to the encyclopedia.

This workshop will not be the last, as collective editing workshops will be held on a variety of topics in the coming months, in an effort to promote open knowledge.

Enhancing women’s presence on Wikipedia is an extremely important issue. “I believe it is absolutely essential that we do our homework, and work hard on the history of Arab women … To know our past better is to understand ourselves better, and to plan for the future better. I hope young feminist scholars and writers will take our movements in this direction,” Jean Said Makdisi told the Knowledge Workshop during a talk earlier this year.