According to the Cambridge dictionary, a gated community is a group of houses, surrounded by fences or walls, that can only be entered by the people who live there. A great example is New Cairo city in Egypt,  but they also exist in many countries around the world.

According to a research paper by Yasser Mahgoub and Fatma Khalfani titled “Sustainability of Gated Communities in Developing Countries. Developing Country Studies”, security, privacy and exclusivity are the main factors that attract Americans to gated communities. The rise of gated communities in the US reached its peak after the 9-11 terrorist attack as they were considered secure domestic oasis. ​Real estate developers were marketing compounds as a secure environment offering protected enclaves, with walls and gates to keep strangers out.

According to a research paper titled “Building bridges or gates? Gated communities’ escape from reality” by Sam Sarpong, unlike Latin America, gated communities emerged in the US specifically for urban elites, not summer resorts. 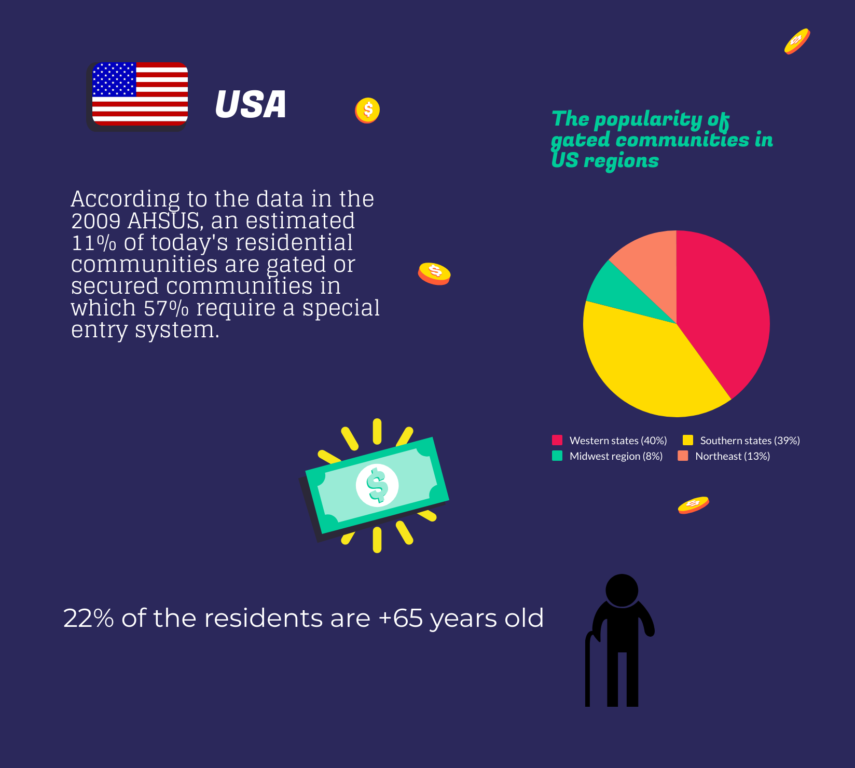 For East Asia and South Africa, they emerged to solve the problems of high crime rates and ethnic conflicts.

​In Saudi Arabia, there is another type of gated communities that aims to provide its inhabitants with the same lifestyle of their homelands, so that they can freely practice their daily activities. 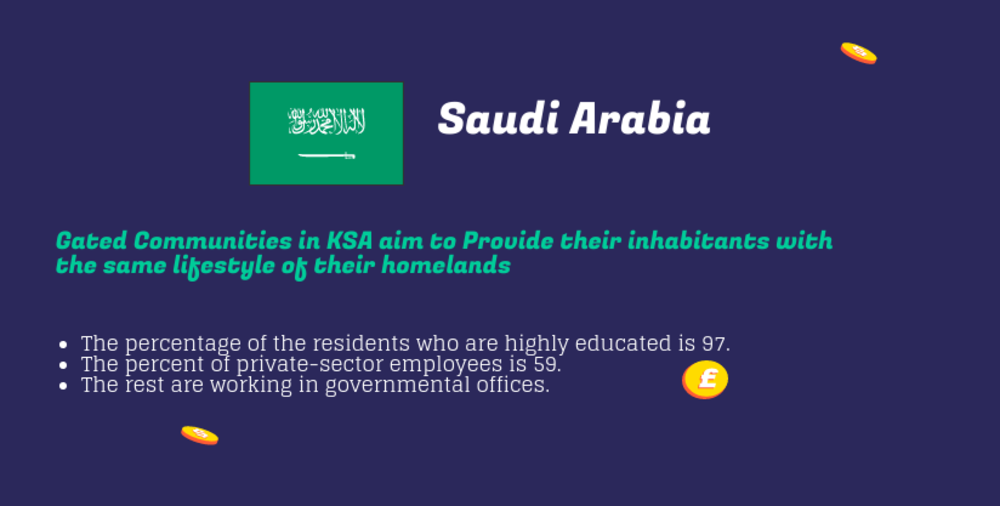 Gated communities in Egypt have a long history. Year after year, they expand enormously on the land of Egypt promoting the idea of luxurious life, safety and services. 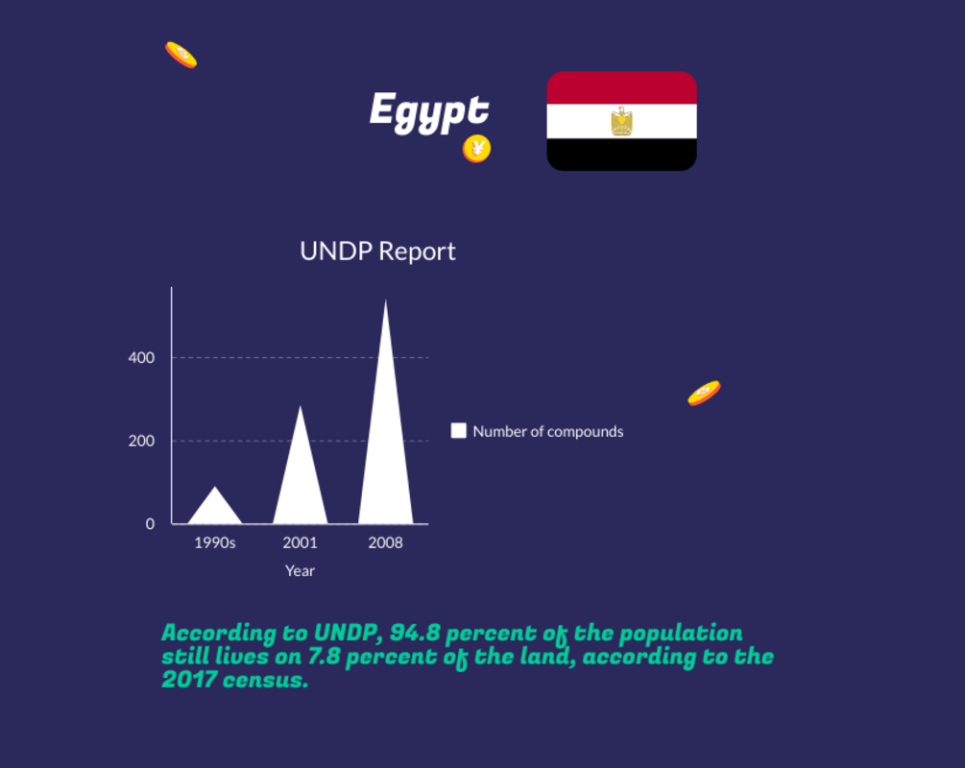 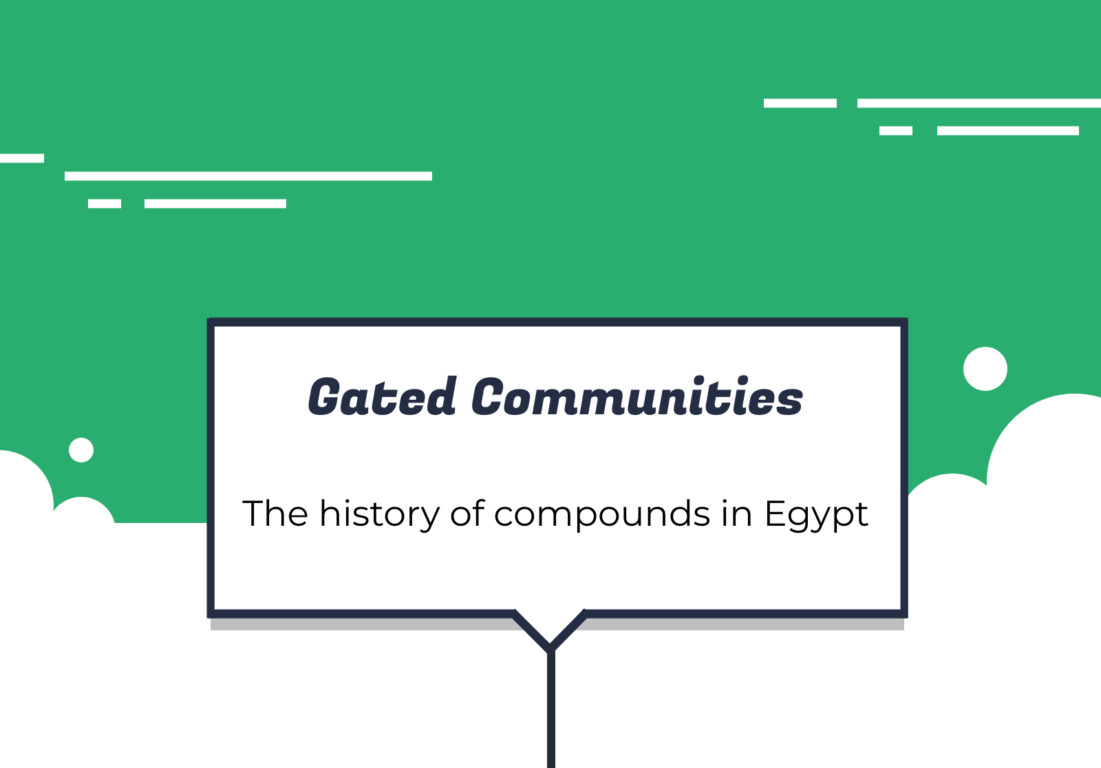 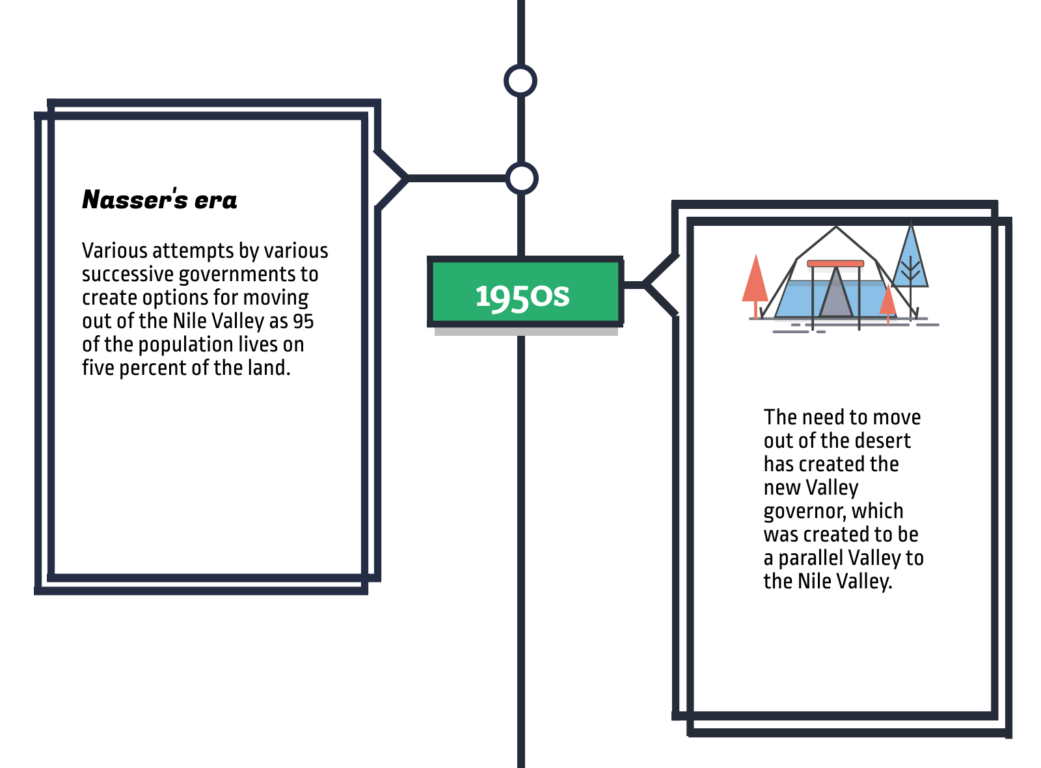 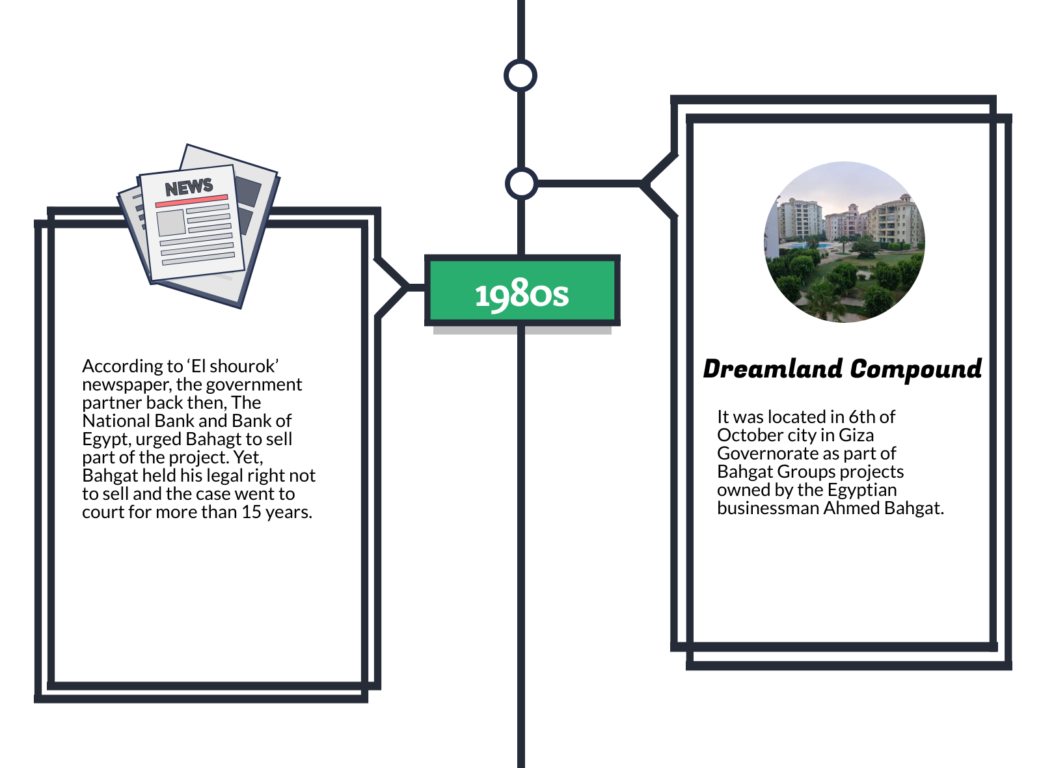 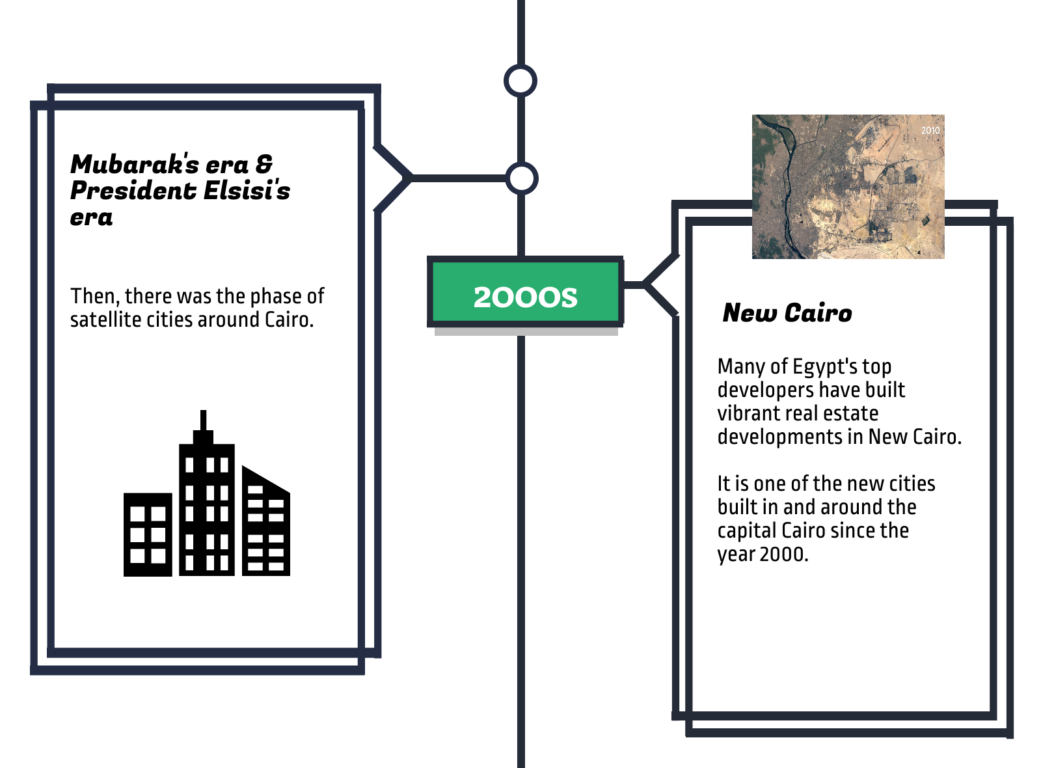 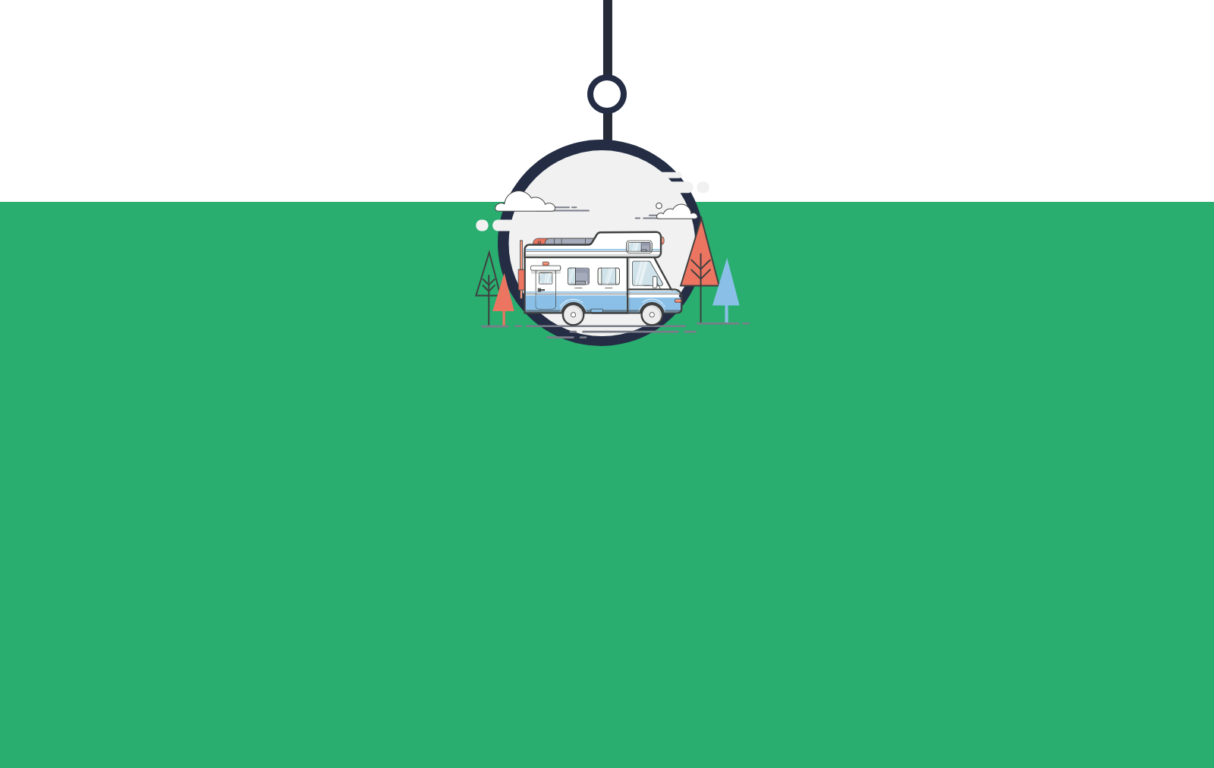 “Gated communities encourage classist behavior, and I saw a lot of that when I was living in one,” Albert Bassili, a young man used to live in a compound said.

In the 1990s they took more developed formats in the shape of 6th of October city, ElSheikh Zayed, New Cairo, First Settlement, ElShorouk, and other cities.

The price of real estate was high, making them too expensive for those on limited incomes.

For example, the average price of one square meter in Madinaty is EGP 20,000 and around EGP 12,000 in some compounds in Sheikh Zayed.

“Real estate developers offer a high rate to attract a certain level of people. Some rates are exaggerated [so people feel] unique and classy. Also, the developers try to hide the disadvantages [of compounds] or worse by saying lies about the offered capabilities,” Electrical engineer Samuel Rafaat said.

The professor of practice at the architecture department at The American University in Cairo (AUC) and the founder of ‘Emergency Exit’ project that aims to raise awareness about the disadvantages of gated communities Amr Abdel Kawy,  stated that breaking down society into different isolated components that do not necessarily behave together could be dangerous for the city’s well-being even if it is for security reasons.

According to the data in the American Housing Survey for the United States (AHSUS), there is no concrete data that proves or disproves that gated communities or private fencing promise residents a higher level of security or decreased crime rates.

Yet, security still is the main reason for many compound residents to choose this way of life.

For Mona Galal, a Retired Banker and Former Head of Strategic Relations finds living in a gated community is very “comforting”.

“I feel secure to the extent that I don’t need to lock my front door [or] gate,” Galal said. “Kids can come and go freely within the community, almost unsupervised, [and] when I travel, I can leave my dog in the garden and there’s always someone willing to come feed him.”

While some people choose to live in a compound because of security, others complain about the lack of police in their compounds.

“There is no police and youth from outside the compound do drugs next to the compound on Thursday and Friday, and acts of indecent behavior on the street,” Kaled Mahmoud, Senior Financial Analyst living in a compound in ElSheikh Zayed, said.

Other residents take a middle ground and weigh the advantages and the disadvantages from their point of view.

Heba Matbouli, Assistant Lecturer and a Ph.D. Student, spoke about her experience living in a compound for five years.

“I am for it for a number of reasons; security personnel instead of “ghafar” and their families, more landscape and relatively less crime rate,” Matbouli said.

For the drawbacks, she thinks compounds promote isolation and more barriers between individuals.

There are also people totally against living in a compound.

Amr Taha, AUC Alumni, said that gated communities, from a social perspective, are the worst thing that ever “befell” Egypt.

“My parents live in [a compound] and I have very strong feelings against them,” Taha said. “It further creates the bubble feeling.”

Population density has remained relatively low in new cities around Cairo and housed 1.3 million people or one-third of those targeted in 2016.

​For the biggest percentage of the Egyptian population, living in a compound is just a dream.

Listen to the following podcast to find more different opinions regarding gated communities in Egypt:

What will happen next?

​In the past, the growth of the middle classes in the 1950s, 1960s and 1970s paved the way for the emergence of districts such as Heliopolis, Zamalek, Garden City, Mohandessin and Dokki.

Same is happening now with the emergence of the new capital, leaving the Capital Cairo as crowded as it is now.

The researcher Jill Grant stated that there have been geographical extensions since the gated communities are not disconnected from Cairo but are extensions of the capital.

​Cities like 6th of October city, ElObour, New Cairo and Qattamiya are only 25km or 40km away from the capital.

But, as this is not the case for the New Capital, it is another proof for the plan to make Egypt divided into gated communities.
​
Especially that the Administrative Capital for Urban Development (ACUD), the company overseeing the project, is 51 percent owned by the Egyptian military as is the land for the new capital. The remaining 49 percent of ACUD is controlled by Egypt’s ministry of housing.

Also, according to Guardian’s article “Cairo has started to become ugly’: why Egypt is building a new capital city”, the new capital will span 700 sq km, making it almost as large as Singapore.

Amr Abdel Kawy, the Professor of Practice at the Architecture Department at AUC said that the government became a real estate developer because it is the biggest landowner in Egypt.

If the government’s plans are successful, the move will leave behind a network of empty buildings, all owned by the same umbrella company as the new capital, and for which there is currently no plan. For the government, the new administrative capital represents a fresh start – but one that will draw wealth from the existing capital.

The New Capital will make even more classifications within the compounds according to the known social class and community that lives inside them.

Social classification will grow more  to classify people by the status of the compound they live inside after it was between compound residents and outsiders.

​Tarek Mahdy, Owner of Inspire Real Estate said that Egypt is probably going to be fully formed of gated communities as it is happening now. He believes this is the intention of the government. 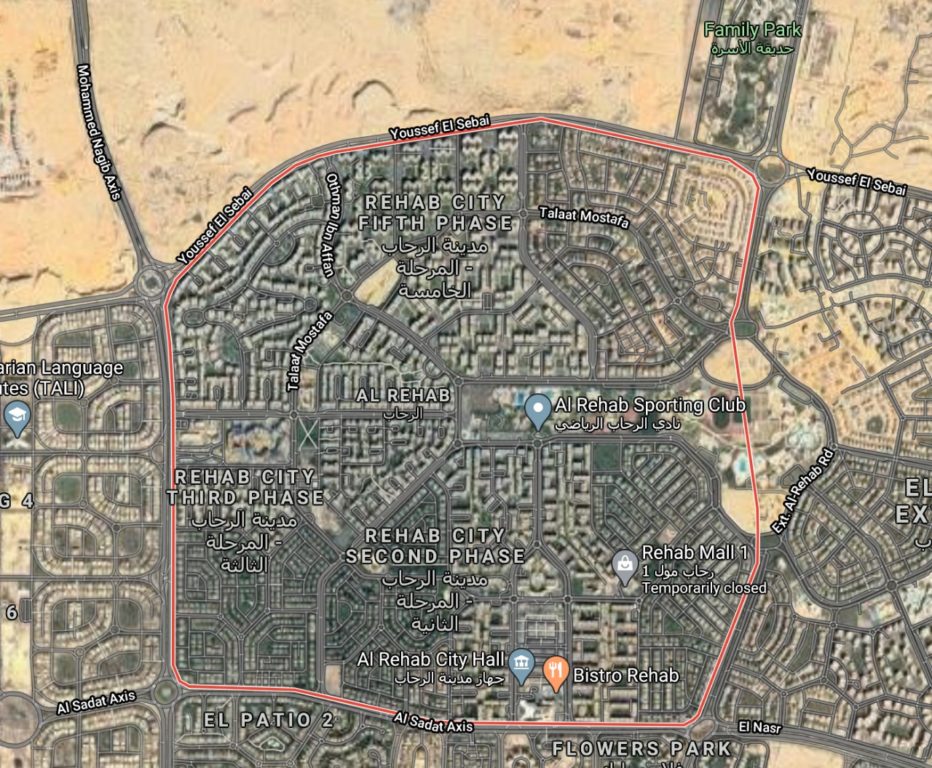 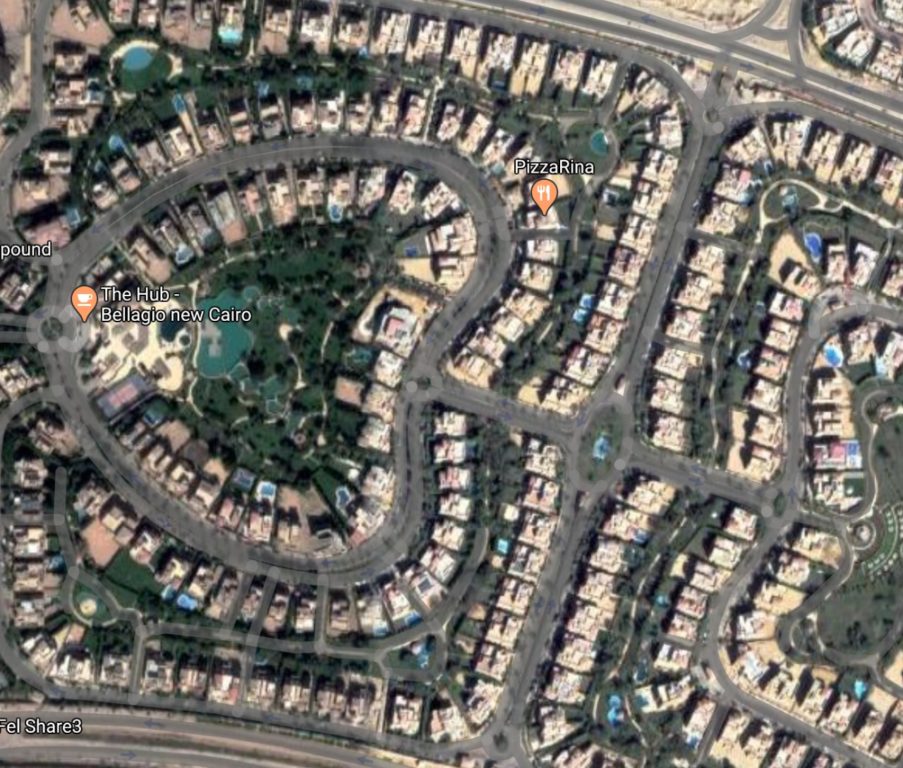 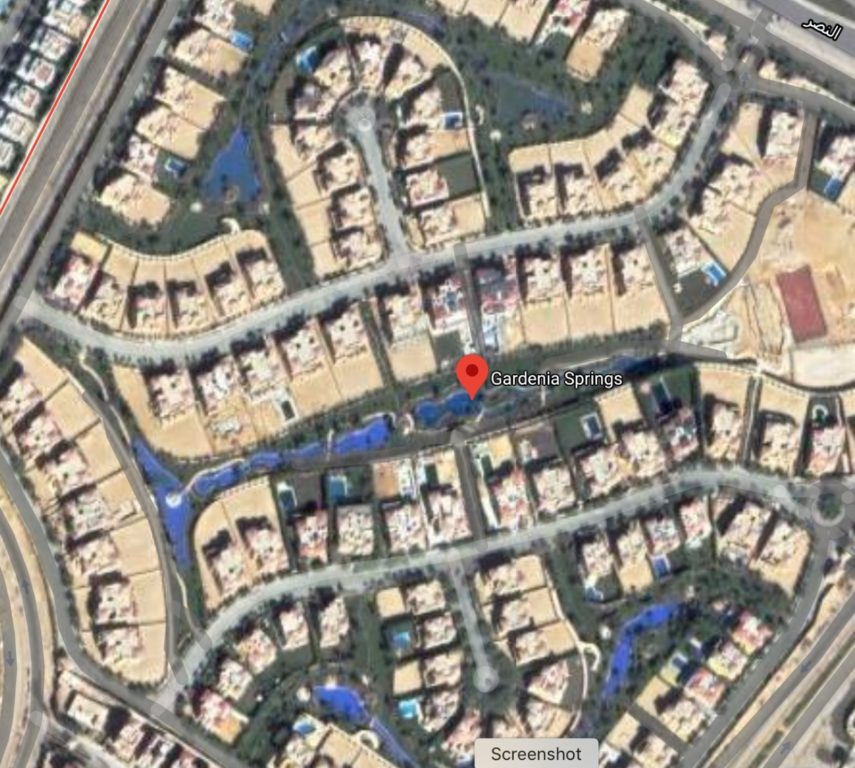 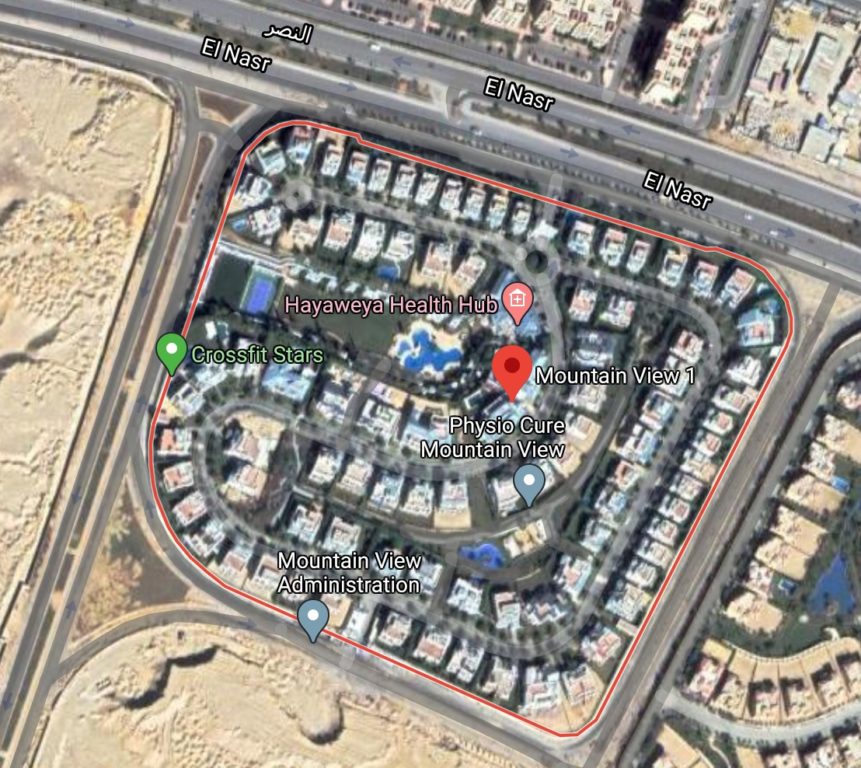 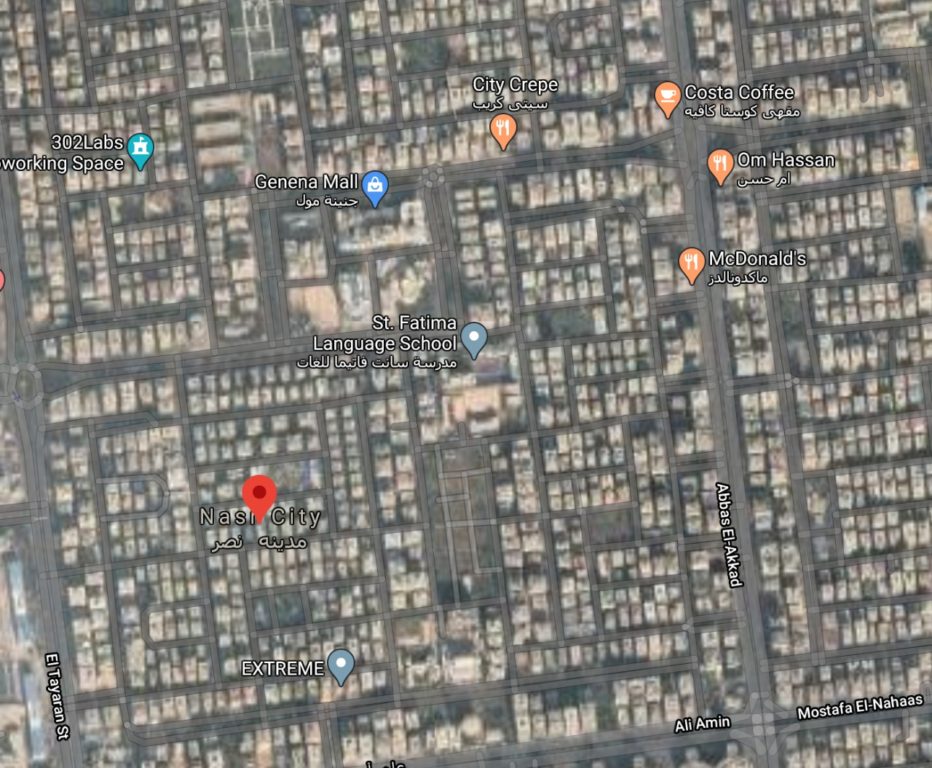 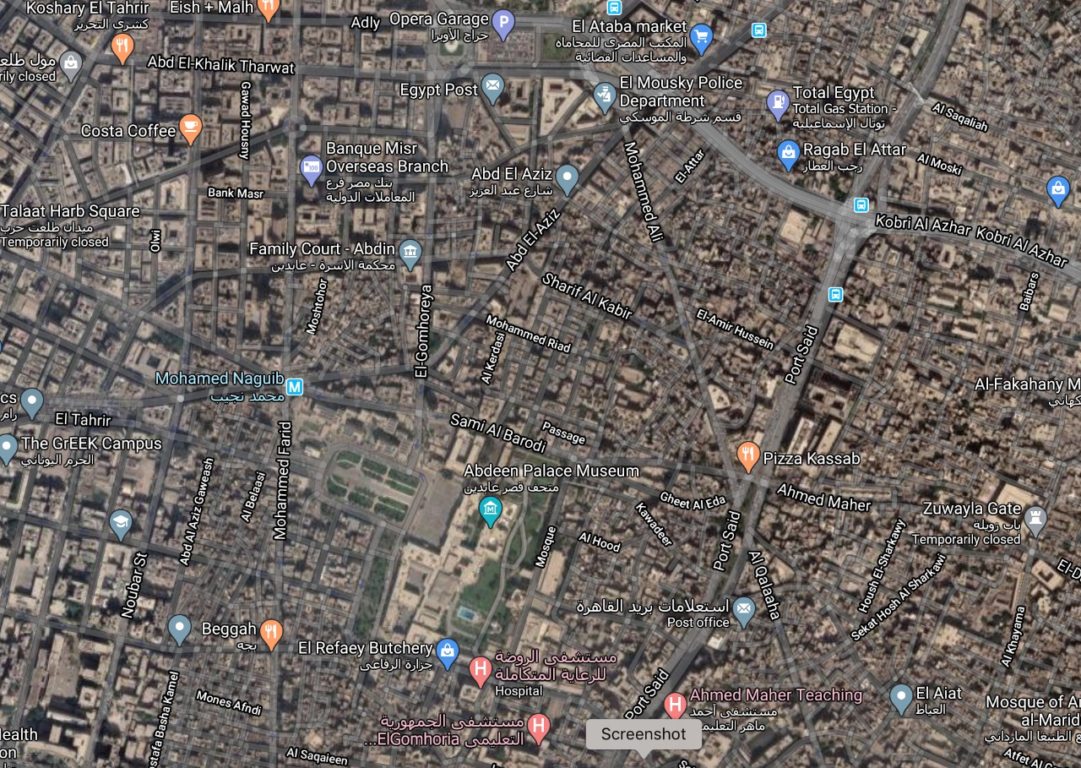 Here are some points of comparison between the urban designing in gated communities and the other areas in Cairo:

The presence of gates as shown in image (1) that the compound is surrounded with a gate marked by the red line.

Organization and space: Image (4) demonstrates how residential areas in compounds are organized and each surrounded by free space, while in image (6) the buildings are disorganized and all packed beside each other. In image (5) we can see some organization, yet there are a huge number of buildings in the same area.

Streets between blocks: In image (6) we can see that streets are narrow and tight while in images (2,3,4) there are wider streets between the residential blocks.
​

​The future of gated communities in Egypt is still mysterious, but all the signs say that they are growing more and more without realizing their disadvantages or working on improving them from neither the government nor the real estate developers. ​

*It was done for the capstone course at the Journalism and Mass Communications department at the American University in Cairo under the supervision of professor Naila Hamdy for the spring semester of 2020.

Disclaimer: Due to the coronavirus situation, many footage used in this project don’t belong to us.