“The shores used to be our daily destination, a place to relax and have a swim.” That’s how Rita Hanna longs for the days when she and her cousins used to walk all the way from Ghadir, a village in Keserwan district almost 16km north of Beirut, to the seaside area of the region. Rita and her family, originally from Beit-Dine, had fled the 1975 Lebanese civil war to Ghadir, and for them the beach was the only way to escape the violence and death that dominated their surroundings and haunted their memories. “Our constant destinations were Okaibe and the spaces where the Green Beach Resort and all the other private developments are found today” Rita added. 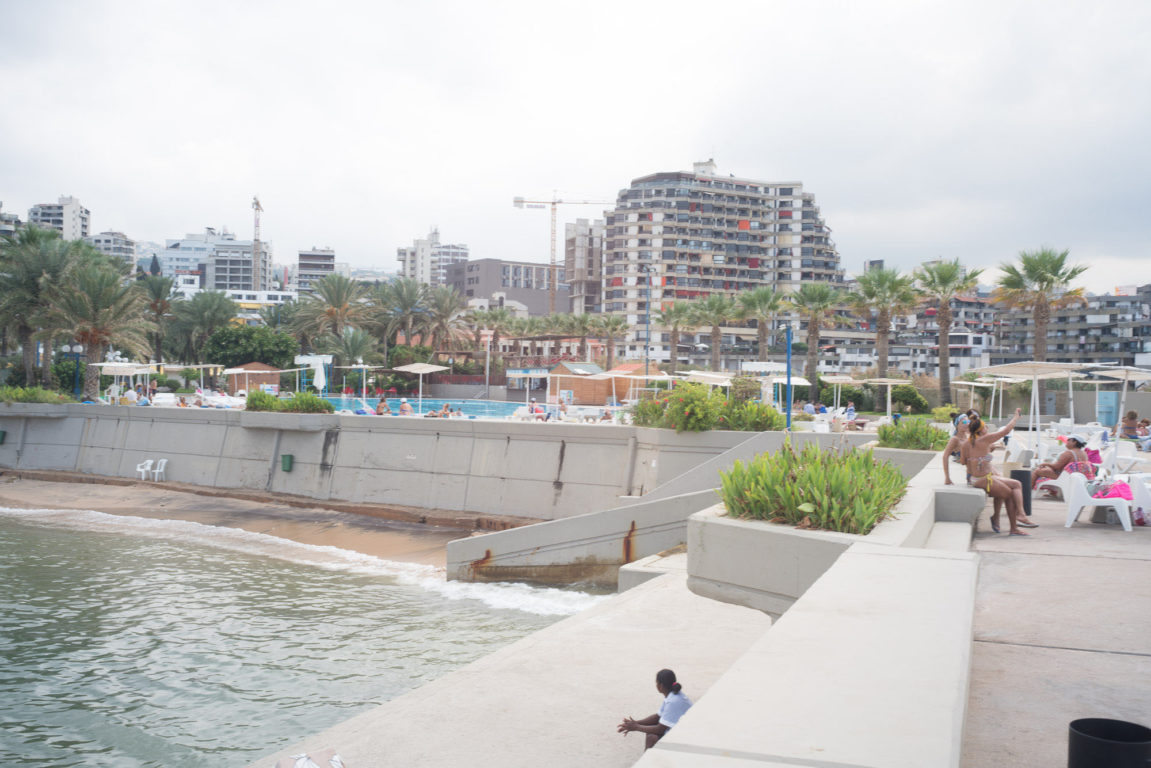 The country’s 225-kilometre coastline goes north to south, covering the capital Beirut and other major cities like Tripoli and Sidon. The shore which was once a place for rest and play is now skirted with privatized centers whose entrance charges make the sands unaffordable to most Lebanese citizens. Not only do these luxury developments block beach access, but they make a sea view almost impossible without trespassing on their territories. “It’s hard having to pay certain fees to spend some good time and do something you have always loved. After the war everything changed, one of the things was the rise of these resorts that is not allowing us to enjoy, as often, the summer you always wish for” said Rita.

Even though these developments are believed to have been built as a result of state absence during the war, the truth is that they are a case of law violation that goes back to the French mandate period. In 1925, High Commissioner General Saraill issued a law that defined maritime public domain within the legal article no.144/S. It states that “it is the seashore extending to the farthest point that waves reach during winter, as well as sand and gravel beaches.” Thus, the borders of maritime public property include not only the water but the utmost point a wave reaches. It can also be concluded that the property space is constantly changing over time by natural factors such as beach erosion or sand accumulation. However, the public domain’s area can expand, but it cannot be abridged even if the reach of the wave decreases as per definition, “It can neither be sold nor acquired as a property over time”. In other words, it is not possible to privatize any section of public property if the sea level drops. On the other hand, If the water level rises to be in line with private property, the borders of the public property zone are then rationalized to take in these parts. 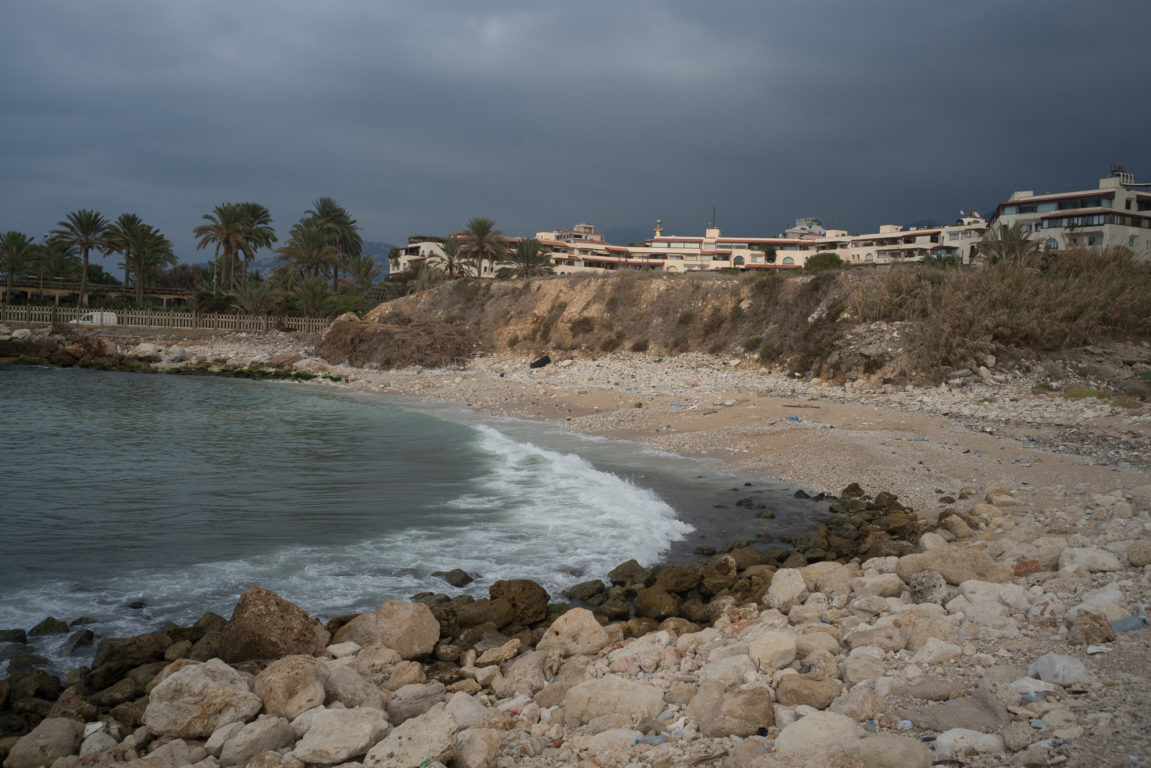 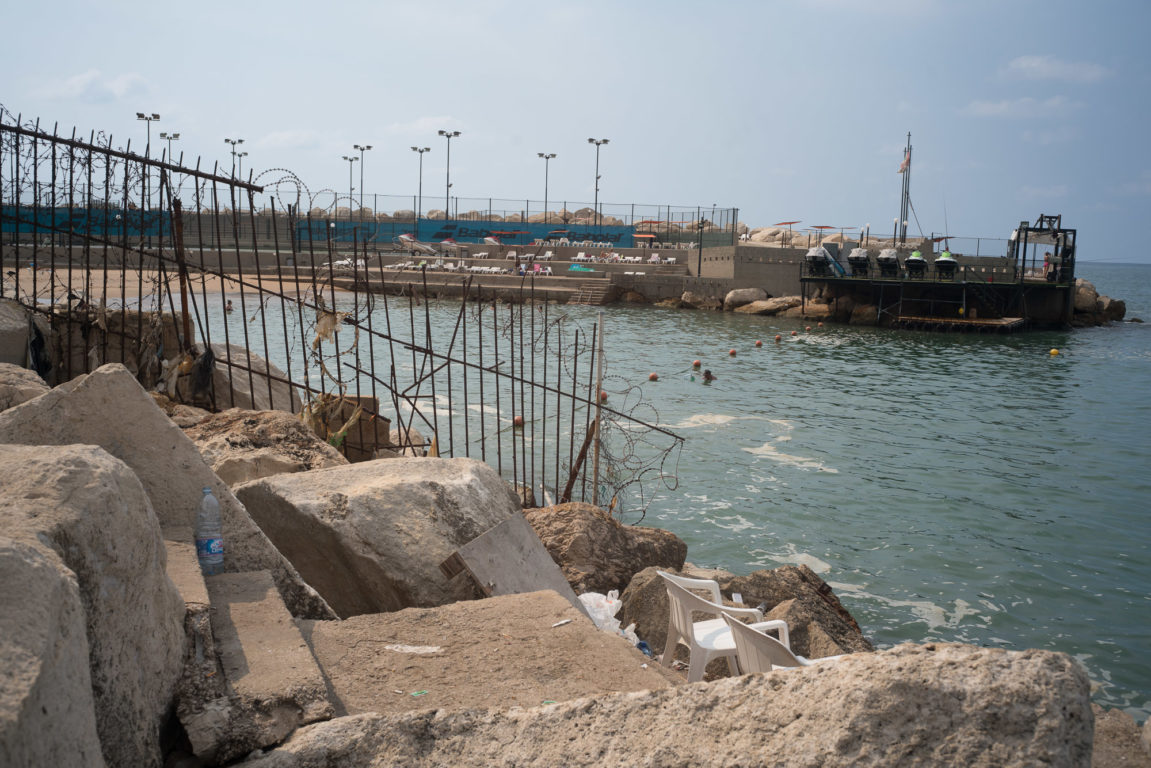 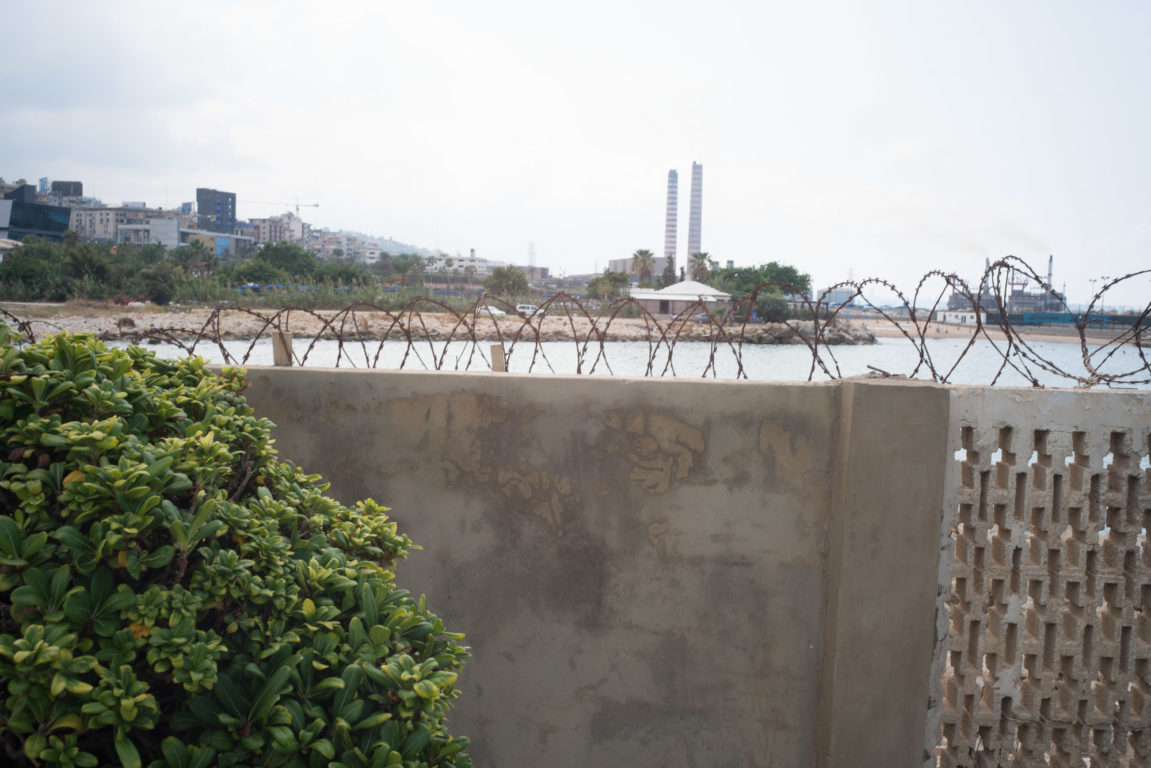 The problem doesn’t rest there; the occupation of Lebanese shores was established in 1966 as government decree 4810 was issued. “The Lebanese rising state didn’t act as if it is responsible for building systems that are subject to the public interest, instead it acted as if it is working for and is under control of those in power and owners of interests. From here the laws were written to fit high class citizens” journalist Mohammad Zbib, editor in chief of Al-Akhbar business page, states. The decree specifies that for occupancy of shores to be allowed, the investor should own a property adjacent to the maritime public property. It also restricted occupancy to areas that are classified as touristic or industrial. “In this way the government said, by law you can’t construct on the beach, but if you want to we can compromise and make it permissible” Zbib comments. By doing this the government didn’t seek the public’s interest in this matter but rather prevailed an exclusive community in which it benefits the owners of economic interest with an excuse that these businesses will enhance the tourist industry.

The decree also imposed that the intended project must also bear a public character and economic justification as a prerequisite for obtaining the license. “In other words, you can own public spaces but also, if you and I want to take a walk from Al Naqoura to the north coastline of Lebanon we should be able to” Zbib explains. However, most private beaches have fences and security guards making it impossible to enter the beach by land without payment.

In addition to that, the corrupted growing government avoided dealing with people who already had a registered land or house before the passed law, which now made their properties public ones, trying not to take away or destroy what people already possessed. With the war coming later in the 70’s situation became more difficult and chaos was spread everywhere which allowed further violation on maritime public domain. “During the war the state didn’t exist, every area had its own militia controlling and managing its affairs. Based on that the militias of every region permitted the people who belong to it to build on the public beach land and provided protection to them which made things worse.” Zbib illustrates. These defilements are an accumulation of several factors, but the governments that were formed following the end of the Lebanese war continued to give licenses for new investments regardless of their illegality and the damage they cause instead of imposing the existing law or implementing a new suitable one. “The government was expected to fix things after the war but it didn’t” Zbib said.

The registration and foundation of these businesses may be of several forms. The first case might be a legitimately recorded industry as a result of directly given licenses through the government. The government with a justification of improving the economic and touristic state passes authorizations to citizens defiling the existing law. The second legal indication of ownership is by buying the land adjacent to the maritime public domain and expanding on to the public space without any governmental intervention to stop that. The entrepreneur buys a property just at the borders of the maritime public domain registers it and expands later in to the public coast. The last scenario is usually a consequence of the civil war, where people have built these fancy places on someone else’s land during the war and no action has been made because they are protected by dominating political actors then and now. All these situations determine the coastline’s inaccessibility, which is an abuse of people’s right to access natural landscapes. 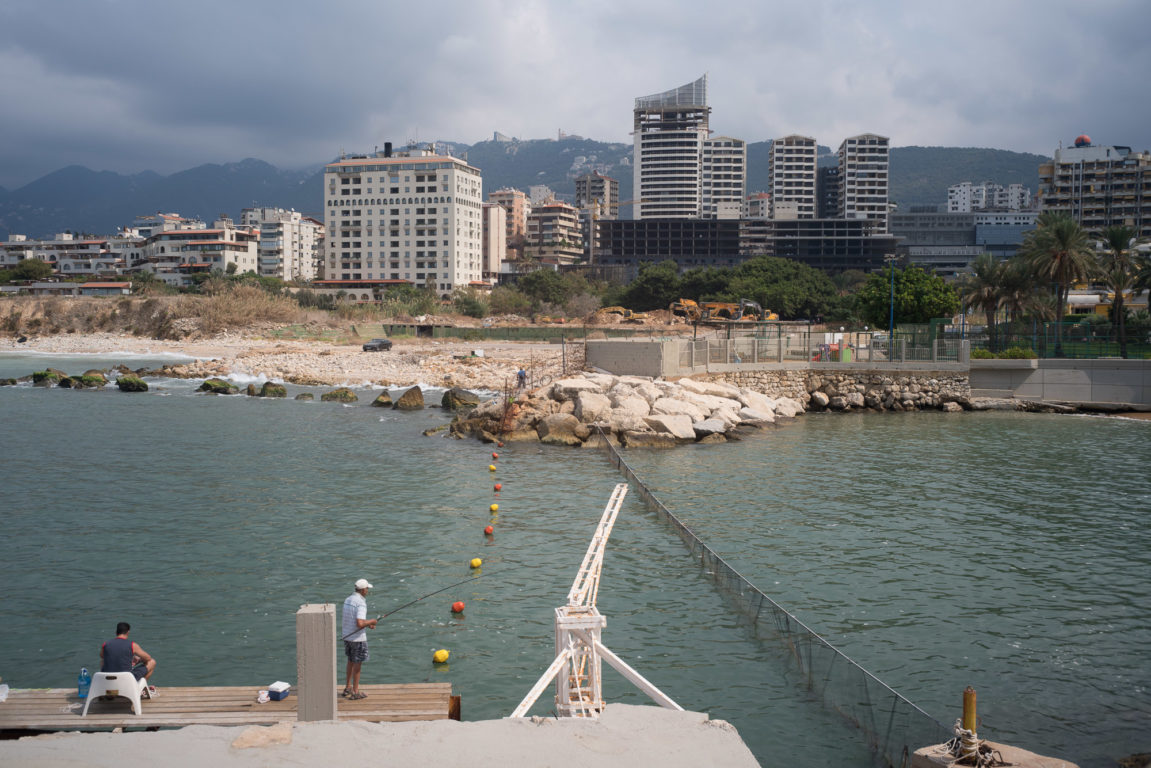 The only documented steps taken regarding this matter date back to 2016. A demand in Lebanon’s annual budget was intended to control the resorts by making the holders pay huge fines and taxes backdated to the civil war, almost $1 billion in total. The government said the money would be used to improve the beaches that are publicly managed, yet nothing has been implemented till this day. Mohammad Ayoub, executive director of Lebanese NGO NAHNOO, an organization that works to promote public spaces and cultural heritage, said: “In this law the violating resorts were also supposed to report their violations but that never happened.”  It is also easy to doubt the government’s capability to deal with the issue as it has bent the rules for so long.

There are no recent studies on the phenomenon, the latest reports were released in 2012 by The Ministry of Public Works and Transport and the Institute of the Environment at the University of Balamand. The studies show that only 40 KM of the 220KM are still open to the public which almost equals to 20%. “It is estimated that there are around 1,100 violations which almost equals to a violation every 6KM. These calculations mean that only 40% of the Lebanese coast is not occupied and half of it is not practically accessible due to geographical factors” Mohammad Zbib clarified.

Resort owners, through several press releases, claim that they are not to be held responsible for the problem. Jean Beyrouti, head of a syndicate of seaside resort operators, states that the spread of this phenomenon is a consequence of absence of governmental investments in public beaches. 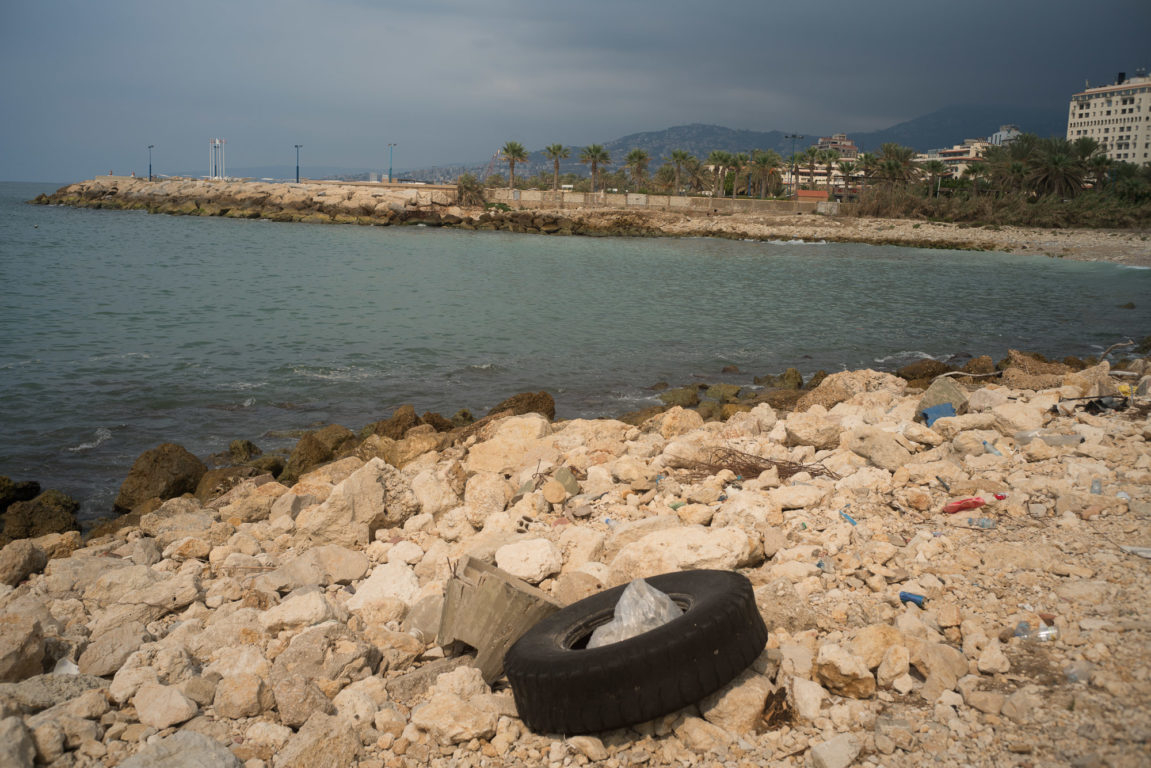 As for realistic solutions, Ayoub finds that the only possible way to remedy this situation is through approaching each violation as a case on its own. “We have to deal with every area one at a time and provide it with the appropriate studies, researches, and campaigns. Our first step was Beirut and hopefully another area is going to be our study space soon.” On another note, NAHNOO also plans to work on a legislation draft that protects public beaches.

Coastline privatizations in Lebanon are preventing people, who have different personal and social backgrounds, from coming together widening by that the gap between various communities in the country. Lebanese governments rely on these differences to keep their corrupted political power in place. Therefore, governments deliberately choose not to implement the existing laws, nor form new policies to protect its interests.