“Aren’t you scared of travelling to Lebanon?” the border guard asked. This view, absurd as it might seem to the wonderful people I met all across Beirut, was repeated time and time again in European circles. Perhaps they had a point, I thought. A long-term stay in Lebanon might indeed be dangerous for my health: the food was absolutely amazing, making it all too easy to overeat.

It is difficult to explain Beirut to somebody who has never been there. What struck me the most was the sheer vocality of the place: the street conversations, the chanting from the mosques. This feeling stuck with me as I roamed throughout the city on the day and as I went to CheckCon’s rooftop launch party in the evening. Admiring Beirut’s main mosque from above, enjoying some more Lebanese food, and talking to overexcited journalists and activists, I couldn’t shake off the feeling that the next two days were going to be absolutely awesome. I wasn’t wrong. 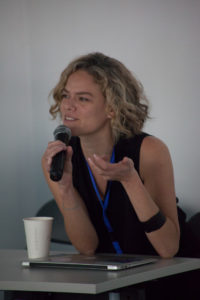 “It’s a good thing thatidea Wikipedia works in practice. Because in theory, it sounds like a disaster,” Katherine Maher remarked during her keynote address. The room seemed to largely agree with this sentiment. Wikipedia works; we all, in fact, forget just how well it works. Mainstream media outlets told Wikipedia’s leaders that their readers stopped trusting them, but continue to trust the online encyclopedia. Many different factors could help explain this phenomenon, Maher argued. Wikipedia has much stronger verifiability mechanisms, with all users able to see its sources and edit history. It also has a policy of strict neutrality. Newspapers, on the other hand, have an unfortunate tendency to mix facts and opinion. Mainstream media can only regain user trust if it boosts transparency, admits its own mistakes and edits and clearly separates facts from editorials. Finally, journalists must stop acting like the sole arbiters of truth, as this only makes them seem condescending and reduces their reach. Many of those prescriptions might feel idealist, but then CheckCon itself was teeming with a strong sense of idealism. This keynote address was no exception.

MENA states have immense political influence, both within and outside of their borders, later panels argued. Investigative journalists have long argued that Facebook formulated its policies on issues such as nudity in response to pressure from the UAE. To make things worse, many global companies fail to understand MENA. Facebook prefers to interact with the Western offices of global NGOs such as the Electronic Frontier Foundation over finding local allies.

Soon thereafter, discussions turned to the role that citizen journalism plays in contemporary MENA. Cooperation between mainstream media and citizen journalists has often proven to be brief. Professional media outlets often find it difficult to change their workflows and integrate citizen content. Still, citizen journalists and NGOs have been very effective at finding new ways of generating and disseminating content, distributing it through videos or podcasts.

The Russian Defence Ministry recently published footage of its military operations on YouTube, showing Russian jets bombing what Moscow described as ISIS targets. Yet a detailed analysis by Bellingcat showed that this was far from the truth. Journalists compared the Russian video to satellite imagery and concluded that Russian jets had, in fact, bombed a water treatment plant, a move described as a ‘war crime’. The most stunning part of this was that the Russian government had itself filmed and published this bombing, oblivious to the attention that it would attract. Modern warfare and war journalism is full of such case studies. Citizens will often take their own videos when they witness political events, demonstrations, or troop movements. New NGOs have now sprung up, training citizens in how best to take and label such videos. One of them, the Syrian Archive, attempts to create a comprehensive, labelled, and searchable database of countless human rights violations all across Syria. Such data is then sent to a large group of organisations, including the UN and the EU’s human rights bodies, which can prepare court cases based on such evidence. 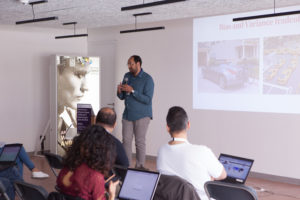 Tarek Amr – Keynote: How Artificial Intelligence will change the media

We all use autocorrect. We all remember autocorrect mistakes. But we rarely think about how autocorrect shapes our vocabulary, the very way in which we communicate. This was just one of the issues that the second day’s keynote address, on AI and journalism, set off to investigate. AI already has a massive impact on modern journalism – some news outlets even use it to tailor headlines to specific audiences. Facebook’s News Feed similarly prioritises certain topics over others, effectively deciding what type of media we wish to consume. The problem is that such AIs are not value neutral. Some of them base their decisions based on commercial considerations, showing us the most profitable content. Others are based on historical data and could therefore end up reflecting our existing racial and gender biases. None of those questions have an easy solution. AI has become an inescapable part of our modern world and we can no longer ignore it. All we can do is become more aware of it.

The second part of the day was dedicated to an unconference. An unconference consists of ad-hoc panels and discussion sessions, with everyone contributing. Talks were spread across many different rooms and looked at many topics, from geo-mapping to activism. Ours looked at the future of activism online. Many forget that activism is a two-way process: activists need to both speak out and listen. The first one is easy in an age of social media. The second one has become much more difficult. Social media has placed many of us in echo chambers and filter bubbles, which means that we only listen to one side of the political dispute. This process is often voluntary – we frequently befriend and follow those who share our views – but social media algorithms also tend to select articles that we agree with. This introduces very deep difficulties for activists who would like to reach out to another side of the political spectrum. None of us had an immediate solution to this problem. But, in a typically optimistic CheckCon fashion, we agreed to discuss it further, exchanged contact details, and continue to dream of and work on a world in which such issues can be overcome.