The Launch of the NAWA Media website in dual languages, English and Arabic, is a real milestone in the development of the project. It allows us to communicate to a wider audience and hopefully will help the project grow and become more relevant, culturally and practically for people in the NAWA region.

We began initially by building Arabic sections into the English website, starting with embedded Arabic learning resources, then adding dual language newsroom capabilities and a learning resource interface. Moving to a completely native Arabic system is the final step in this process. It also allows Arabic speakers posting on the website to administrate and contribute in their first language, hopefully for a smooth user experience.

I have designed websites, posters and other graphic materials in various foreign languages although always using the Latin alphabet, in German or French for example. There are of course cultural sensitivities to be aware of but generally the same typographic rules apply. Working in Arabic however has posed a unique set of challenges, there is a different character set with multiple ligatures per word and opposite reading direction to consider. However working with a supportive team including Arabic speakers has meant that the design process throughout has been really quite fluid.

The biggest challenges I have faced have actually been with software, Adobe and Microsoft programmes both having their issues regarding punctuation, character arrangement and formatting generally. In 2015 when I joined the project, then called Arab Citizen Media, I worked in Arabic for the first time and was quite amazed that these kind of typesetting issues were so prevalent for such a large user base.

Typesetting and designing in Arabic for me is quite an abstract experience, given that I can’t read the texts. I do enjoy it though and find some of the Arabic typefaces truly beautiful, much more than just functional communication tools. When initially developing the graphic identity for the project I found the pioneering works of Nadine Chahine, the Lebanese type designer who has created Arabic versions of some major latin typefaces, Din Next Arabic and Univers Next Arabic for example. We settled on another of her works, Frutiger Arabic (2007), which we use in conjunction with the standard Frutiger (1976) for the english body text. Chahine worked with Adrian Frutiger to develop the Arabic version for Monotype. Being able to use Latin and Arabic versions of the same typeface has helped us keep the graphic style unified and consistent across both websites.

It is worth noting that we do use a different typeface for the English titles and logo, Aptifer Slab, with no Arabic equivalent, a little variety brings some character I think. 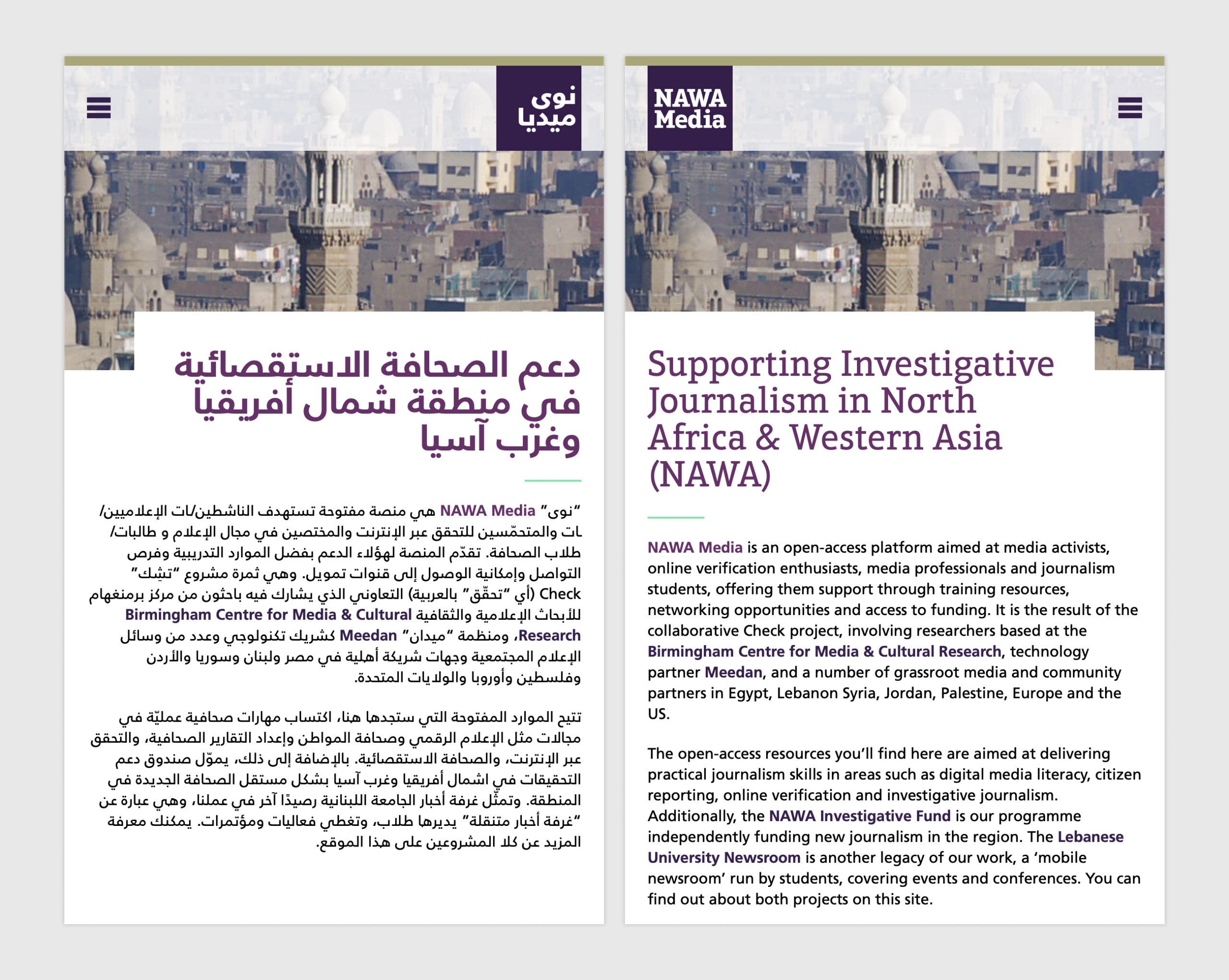 We will continue to develop the dual websites as the project progresses, now that we have the ability to post content in language specific areas it will be interesting to see how the English and Arabic speaking audiences grow and interact with the website.

To see how the Arabic works click on the little button in the top right of this website’s header or visit ar.nawamedia.org.